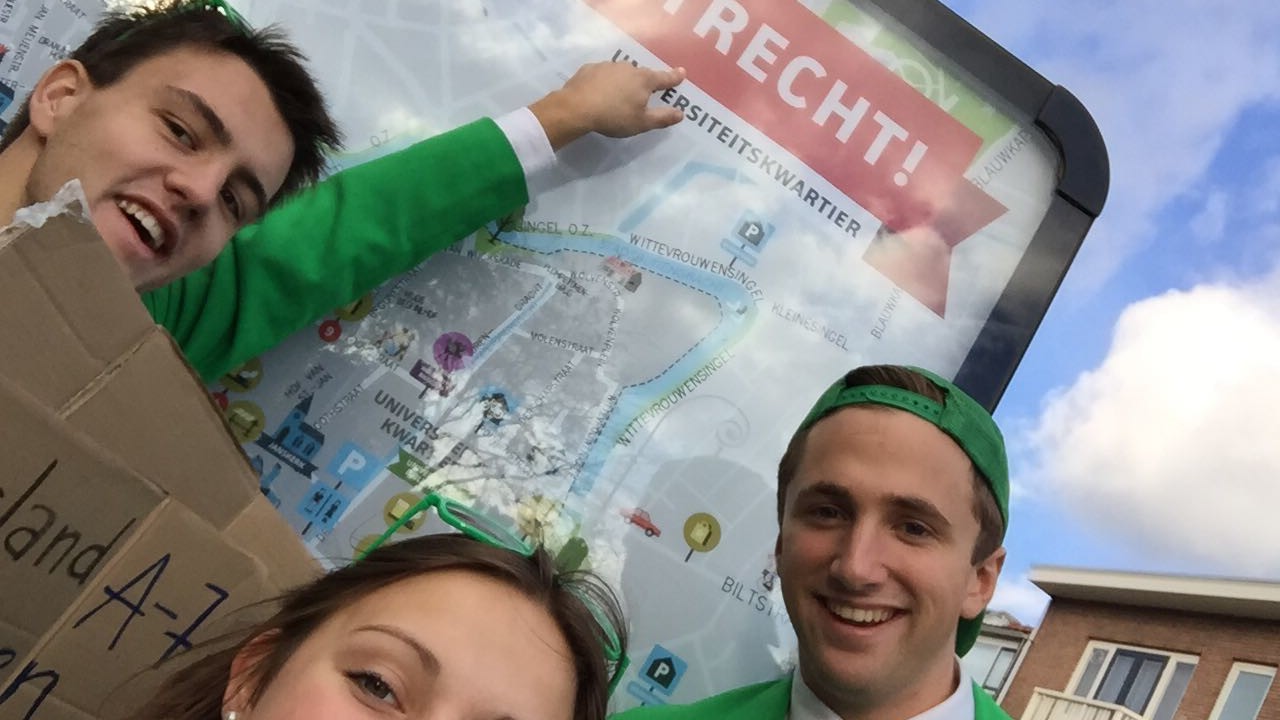 On Wednesday the 16th of November, three brave souls left for a long and hard journey to the far Gorredijk. Our beloved secretary Jeroen, the famous German superwoman Marie-Sophie and my humble self had decided to test whether or not it was still possible to hitchhike in the Netherlands. Wearing beautiful green suits and sweaters and having filled our knapsacks optimally with “Fries roggebrood”, a couple of beers and some cardboard, we left Kralingse Zoom full of optimism at 12:00. Then the question was: where to stand? We decided to start at the gas station near highway A20.

However, when standing there we encountered a problem: everybody seemed to think we were crazy. After half an hour, only 5 cars had stopped, all which of claiming to go “in the other direction”, statistically highly unlikely with a p-value of 0.02! Jeroen was already thinking about taking the train when an older woman stopped and advised us to (illegally) stand next in the grassland next to the highway entrance. And guess what? We were picked up within 5 minutes! 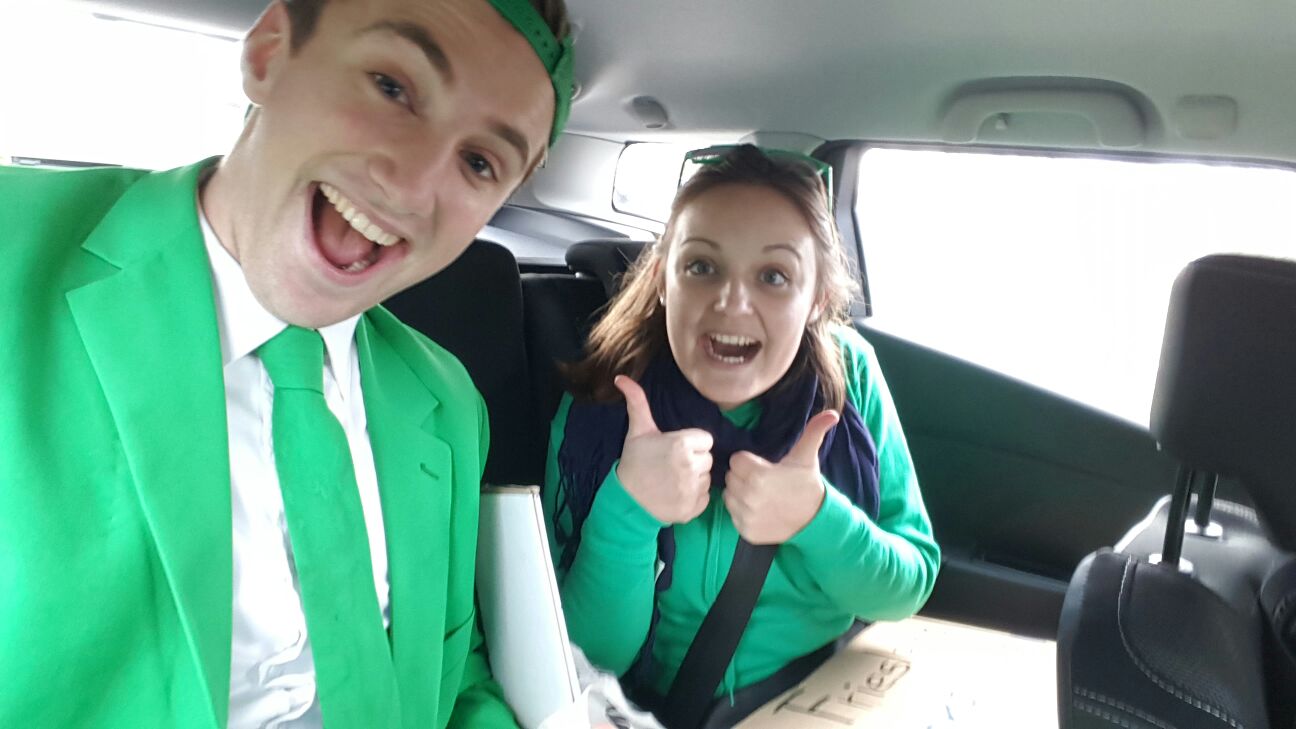 We were dropped off in the centre of Utrecht, which was an absolute disaster. There was no place to be picked up within half an hour walking distance and as a matter of principle we refused to take the public transport.

It had gotten extremely cold and it had started raining. Just when we had given up hope and started on our beers for consolation…

We walked through Utrecht for an hour, and after great, but fruitless conversations with random people, we finally arrived at another highway entrance, where we were picked up for direction Nijkerk. There we were picked up by a kind Polish woman, who dropped us at a desolated parking area next to the highway, where we were the only people. It had gotten extremely cold and it had started raining. Just when we had given up hope and started on our beers for consolation… 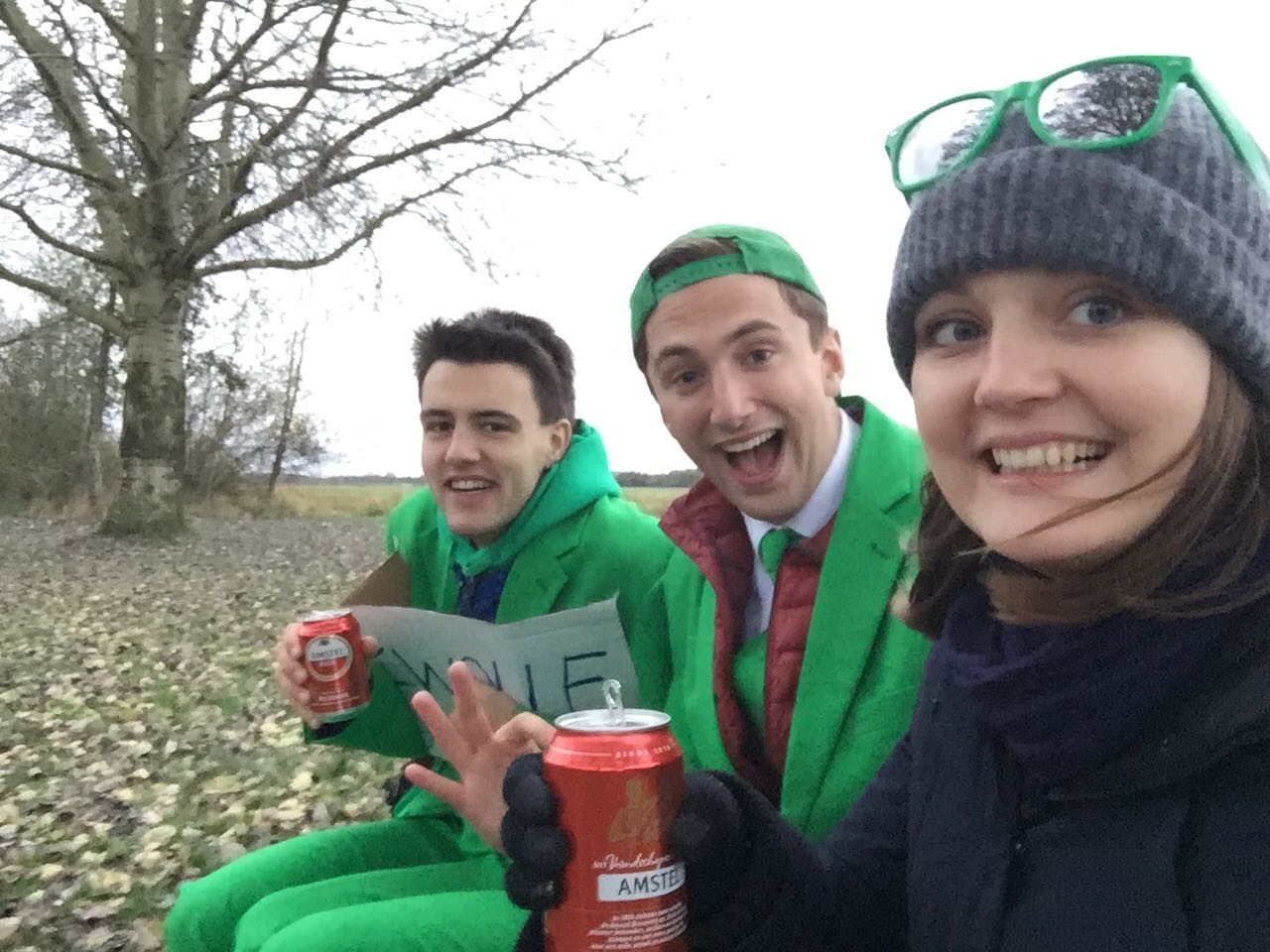 (...) we literally were dropped on the highway and just when we thought that the only people who were going to pick us up were the police, our car number 5 stopped (...)

… a formally dressed banker in a new lease car agreed to drive us poor souls a ride to Zwolle! In Zwolle we literally were dropped on the highway and just when we thought that the only people who were going to pick us up were the police, our car number 5 stopped and brought us to the next gas station. Our hopes revitalised by this success, we started hypothesizing about actually arriving at our destinations alive! At the gas station we approached everyone except some guy carrying a gun (we hoped he was police), and after 10 minutes an older guy who collected light bulbs was okay with us driving along, even though it meant he had to entirely reorganise his Ford Ka to make it fit. We were almost brought to Heerenveen, where we again stood at the highway entrance. 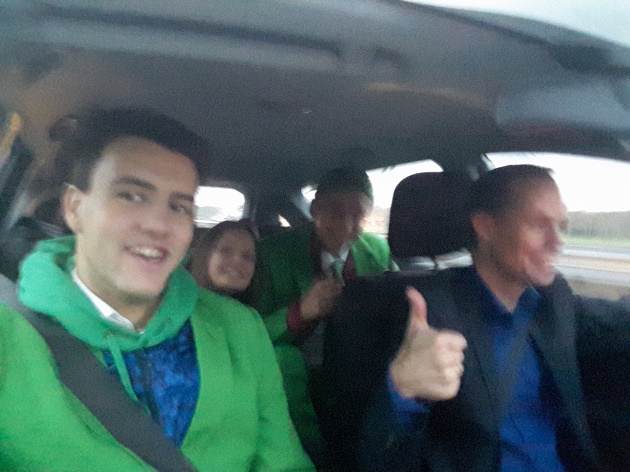 It had gotten dark and even colder and we did some jumping jacks on the ‘vluchtstrook’ to keep warm, and Marie-Sophie was almost hit by a car in a less mindful moment. Luckily, finally a mother with a son stopped for us and took us almost to Gorredijk. Because we refused to take the bus, we even hitchhiked the final part! A kind businessman even decided to drop us off exactly at the address where we had to be! Unfortunately, he was not skilled with the navigation system, so we still had to walk 20 minutes, but at least his intentions were good. And then finally, after 7.5 hours, 8 cars and freezing to the bone, we arrived at our destination.

On the way back we took the bus, which almost went past our stop because there wasn’t usually anyone there, and we enjoyed some card games and ‘pinten’ in the train. It was a great adventure and we should definitely do it again sometime!