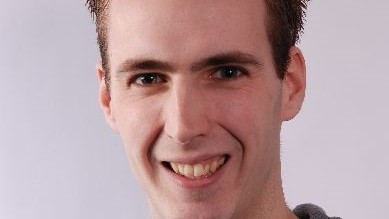 Teacher Talk is back with another episode! This time we gave the turn to Mr. Spliet, assistant professor in i.a. Matrix Algebra and Vector Calculus at the Econometric Institute. He did a PhD on vehicle routing, a subject of which we see Mr. Spliet still works on today, and has recently published articles about this logistical problem in the journals Transportation Science and the European Journal of Operational Research.

Where did you study and how was your student life?

I studied here in Rotterdam; econometrics just like you. I got kind of stuck here. It was fine, I took a bus every day, it was one hour no transfers. I did most of my homework, studying and reading in the bus. It was different from now. There were not so many mandatory attendances. I liked it because it was the responsibility of the student to go or not go. If they didn’t go, they usually wouldn’t pass the test and in the tutorials you had a good and motivated group of students.  I started studying in 2004 and it took me 3 years for the bachelor and 1 year for the master, or in Dutch we say “It was nominaal’’.

I currently work on a project with Albert Heijn, on home delivery

I did my PhD here, Professor Dekker was my promoter. I did vehicle routing; it was a very interesting problem in logistics.  Suppose you have liquor stores, like Gall & Gall, with one distribution center which have to supply every shop every week. They send trucks from the distribution center.  A truck can visit 5-6 stores and then they have to return. So I designed the route for the trucks. It’s a classical problem in logistics.  It’s not really econometrics anymore but more operational research. It has already been studied, but we do it a bit more advanced. We agree with shops to come a certain time, so they can schedule their personal. So they can tell their customers when the new liquor is available. It’s fixed for the year, but you don’t know the demand every day. I studied the time window so that we minimize the transportation costs. That’s one of the things I did, it’s fun and I still work on it today. I actually have a PhD student now, who studies it too.

I also do other stuff, but vehicle routing is my expertise. There are different types: I currently work on a project with Albert Heijn, on home delivery. For example, delivering frozen or fresh products. You must of course be home to put it in the fridge or refrigerator.

How long have you been teaching?

I have been teaching for roughly 5 years, but it depends on how you define teaching. If you count teaching as a TA and PhD, it is 10 to 12 years.

Do you have a favorite formula?

Well here again, I actually don’t have a favorite formula and I don’t actually work with formulas; I work with equations. It would be then the “P = NP” equation. It is a famous equation in operations research. The thing is that we don’t know if it’s true or not. It’s about how difficult problems are. There are problems which can be solved fast in polynomial computation times or less fast with exponential computation times. For certain problems we want to find if there are fast algorithms or not. There are classes for those we know that are fast and for those we know that take exponential computation times. The question is whether the problem is different or we didn’t look hard enough if there are other algorithms.

What did you want to become when you were younger? Always a teacher?

I thought I would never be able to become a teacher, but slowly you grow into it

No, actually not. I never imagined teaching. It is still really fun; I like doing this. When I was a student, I would see the teachers and always think that it was magic. How do they do these things by heart, sharing so much knowledge from the top of their head to hundreds of people at the same time? I thought I would never be able to become something like that, but slowly you grow into it. However, when I was really young I wanted to become a professional football (soccer) player and I always thought I could. Later I found out I wasn’t good enough or let’s say I didn’t had the time for it. (Laughing)

You already introduced the next question. What do you do in your free time?

I play football again. I played football until I was 18 and then I started studying in Rotterdam. I didn’t use to live in Rotterdam and I used to be 6 times a week on the football field. So, it didn’t work out and I decided to stop because I didn’t want to put in only half the effort. Now I am at the point where I have some spare time left to play football again. I am not that good anymore as I used to be, but I still enjoy it.

I like to do sports. I did a lot of running (...) I cycle and play basketball with friends

I like to do sports. I did a lot of running, because you can schedule it whenever you like. I cycle, play basketball with friends. I like to watch television series after a long day of teaching. I like to play videogames, on an Xbox. So, those kinds of things.

Again I don’t have a favorite, because I always see the good and bad sides of things. But the show I enjoy the most is Games of Thrones as some of you know. I do like to make a reference about it in my class. My favorite character would be the midget, Tyrion Lannister. Game of Thrones is actually a special, because usually I like watching shows when the last season has ended so that I can watch it from the beginning to the end without interruption of a year, since I don’t like to wait for years. Game of Thrones is an exception; it’s the special one for me.

What kind of music do you listen to?

I don’t have a specific taste. I listen to pop music the most, but it depends on the moment. For example I like to listen to jazz and blues when I have friends over, for dinner, because pop distracts during those kind of stuff.

Do you recommend music to study with?

The show I enjoy the most is Games of Thrones

I don’t. Some people like classical music, without singing. I tried it, but it didn’t work for me; it was too distracting. I currently put on albums of Maria Mena, a Norwegian singer. It was in the Dutch Top 40 list, but it’s kind of subculture. But I don’t know if I would recommend it, because she sings quite depressing songs, about suicide etc. I like the way she sings, not really the themes.

Do you travel often? If so, do you have any interesting traveling experiences?

In my field of work, I have the privilege of to go abroad for work once/twice a year. I go on vacation once or twice a year. I got an anecdote too. I went to Egypt when it was sort of still safe. We went to the western side, in the desert. Later I found out it wasn’t that safe to go, but there was a guard traveling with us. So, nothing to worry about. Where we stopped to have lunch, there was a ping pong table, so I started playing with the guard. It was just playing, until a point. He paused for a second, opened his shirt and under his shirt was a huge machine gun. It kind of got in the way, so he put it away and continued to play. Before that, I didn’t know that he was armed, so that was quite a strange experience. After that I let him win of course; you don’t want to mess with an armed guy.

What is something that students don’t know about you?

When I was a student, I failed only one course, the library course

It is a tough question, but I know the answer. When I was a student, I failed only one course, the library course. You had to learn how the databases of the library work etc. It was a one credit course, for which during an afternoon you had to do some stupid Googling in the library, which I never ever used and never ever had to use, but I failed it. So, I had to do it again with three other stupids like me in the evening. That’s something I rarely share with other people, not my proudest moment in life.

What is the strangest thing that happened in class?

It’s not really a funny or strange story to tell, but some time ago a bird got in my lecture in the Aula. There was a bird flying around. It somehow got in and stuck in the room. I didn’t know what to do. Should I continue teaching? It didn’t matter because everyone was already distracted. Later on, it landed right in front of my desk. I didn’t know what to do again, so I said something stupid like “Oh there is a bird in front of my desk.” and I continued the lecture.

What happened to the bird?

I don’t know maybe it got stuck inside and died. I didn’t pay attention to him.

Finally, what do you expect from students in your class?

I don’t expect anything, because then I cannot be disappointed (laughing). There are different types of student, so it’s different for every student. I see groups of hundreds of students at the time, so there are always people who are checking their phone, chatting with each other and others listening intensely. My job is to get everyone's attention or otherwise to motivate them to study. So I know there are students who feel obliged, which I think is good, if they participate in the tutorials and lectures. But if you can study for yourself without paying attention in lectures and tutorials, for me, you don’t have to come to the lecture. I mean you can study the book; it’s not that my lectures are the only way to study.

So, the ideal students would be the ones who can decide for themselves which type of student they are. I see students in the master, who can study perfectly by themselves and I don’t see them the entire block, only during the exams and they pass it with no problem, these are usually the etremely talented students though.