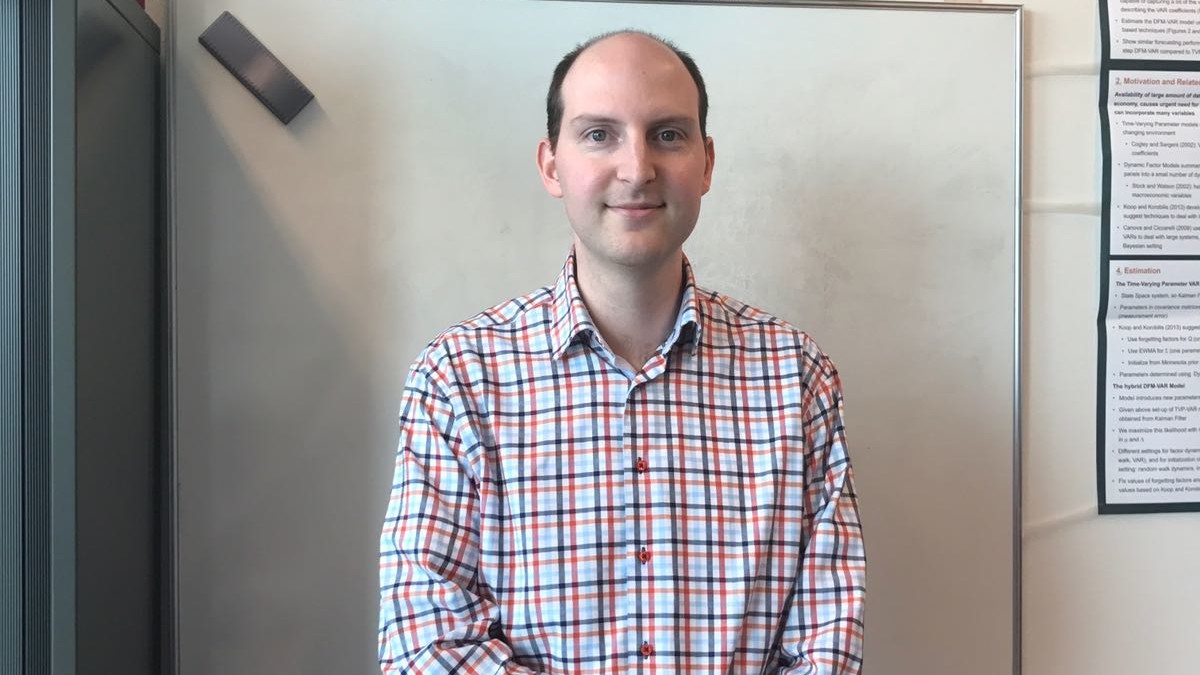 The last Teacher Talk of this block has arrived! During studying for your exams, you can read everything about Mr. Van der Wel, assistant professor in i.a. Econometrics 2 at the Econometric Institute. His main research areas are financial econometrics, time series econometrics, term structure modeling and the macro-finance interaction, of which his work has been published in journals in the field of econometrics, economics and finance.

How was your student life and what kind of student were you?

Studying was a really fun time in my life, because I really enjoyed the study. I studied econometrics in Amsterdam. I remember that I was a little bit of a slow starter, but that in my second year, I really started to see the fun in studying and I became very motivated.

Back in the days, was the econometric faculty much different from what it is now?

It is a little difficult to answer that, considering that back then, I was on the outside, while now I am on the inside. There are lots of similarities and I don’t really see major differences, but of course, there is also the difference in institutions, as they have different atmospheres etc.

Why did you decide to do a PhD and to teach afterwards?

I was very happy and very comfortable doing a PhD, I really enjoyed the freedom.

A the end of my ‘doktoraal’, I worked in business a couple of days a week. I was really happy with what I did in business, but I really liked to make up questions, to try to come up with questions that no one had thought of before and to try to find answers to the questions that I had and to do so in new, inventive ways. So, at that stage, I indeed made a very clear decision to go into academia. Then, I was very happy and very comfortable doing a PhD, I really enjoyed the freedom.

The biggest thing, I would say is that this course is of much more applied nature. Econometrics 1 is a fantastic course and it relies greatly on assumptions and a lot of the assumptions may or may not hold in practice. In Econometrics 2, we test these assumptions and see how we can deal with them, if they do not hold. We take real problems that people can encounter and solve them with econometrics.

What do you expect from the students who follow your course?

I hope that students pay attention and that they think a little bit beyond just being in a classroom, in front of a book.

Saying that they have to work hard is a bit of a boring answer. But, in general, I hope that they pay attention and that they think a little bit beyond just being in a classroom in front of a book, that they also try to work on the applications. I think that is very important, if not only to get a good grade, but also to be ready for the next stage in their study, which is case studies. They are also going to be doing a thesis or even two theses if they are going to do the master programme thereafter, so I think it’s very important to apply the things they learn as well.

What is your favorite mathematical formula?

In the master program, I teach Financial Derivatives. I would say that my favourite formula is the Black-Scholes formula. This is not because the equation is beautiful or anything, but because of how it changed people’s lives. I think it is quite amazing that a formula can do that.

Is there anything that students wouldn't necessarily know about you?

That is very difficult to answer. I don't think so. One of my hobbies is that I love travelling, but that is not particularly weird. Really nothing comes to mind.

What were your travel experiences like? What did you find most memorable?

I always try to make everything memorable. But, one of the best experiences was when I went to Australia with my family, two years ago. That was a fantastic trip. It was around Christmas time and we went to Sydney and Melbourne. There, we rented a car and also went to Tasmania, where we had a bungalow with wallabies in the back yard, which was very cool. Every year I also go to China, because that is where my wife is from. It is a giant country and every year we see a different part and it's very fascinating how one country could be so diverse.

What did you want to become when you were little? Did you always want to be a professor?

One show that I really like is House of Cards, I find it fascinating.

I actually don't remember what it was that I wanted to become, but I do remember that I noticed early on, that I was pretty good at math. I was also very into programming, because computers were quite a new thing back then. But, I don't think I was very clear about what I wanted to do in particular. I just knew that these were things that I would like to work with. So, I guess everything worked out in the end.

What kind of music do you listen to?

What I listen to is very diverse. I like rock music a lot, but I also like other genres, things that I hear on the radio. I don't really have a favourite artist.

Do you enjoy watching any shows and do you have a favourite character?

One show that I really like is House of Cards, I find it fascinating. I'm eagerly waiting for the new season. There are also other good shows, like the Sopranos.

What is your favorite part about your job?

Training the next generation is very cool and I also enjoy the freedom to study any topic.

I like a lot of things. I like the Interaction with students, training the next generation is very cool. I also enjoy the freedom to study any topic. You can decide yourself what topic your next paper is going to be about. I like the variation too. Right now I am really focussed on teaching, but when Econometrics 2 is over, I will no longer be in front of the class this academic year and I can focus on research.

What are you planning to research next?

Now I am very interested in the interaction between the macro economy and the financial economy. For a very long time, they were very separated, but then, there was this big financial crisis that had great macroeconomic effects, so people started to think about what happened. We didn't have this relation in our models yet, so we started working out models to capture it. What I'm working on, is how to estimate these models

Imagine, if you were a pizza, what toppings would you have?

I really like spicy food, so I'd have some spice on there. No Hawaiian, I just think that’s strange. I like Italian food in general. Together with Chinese, it is my favourite food.