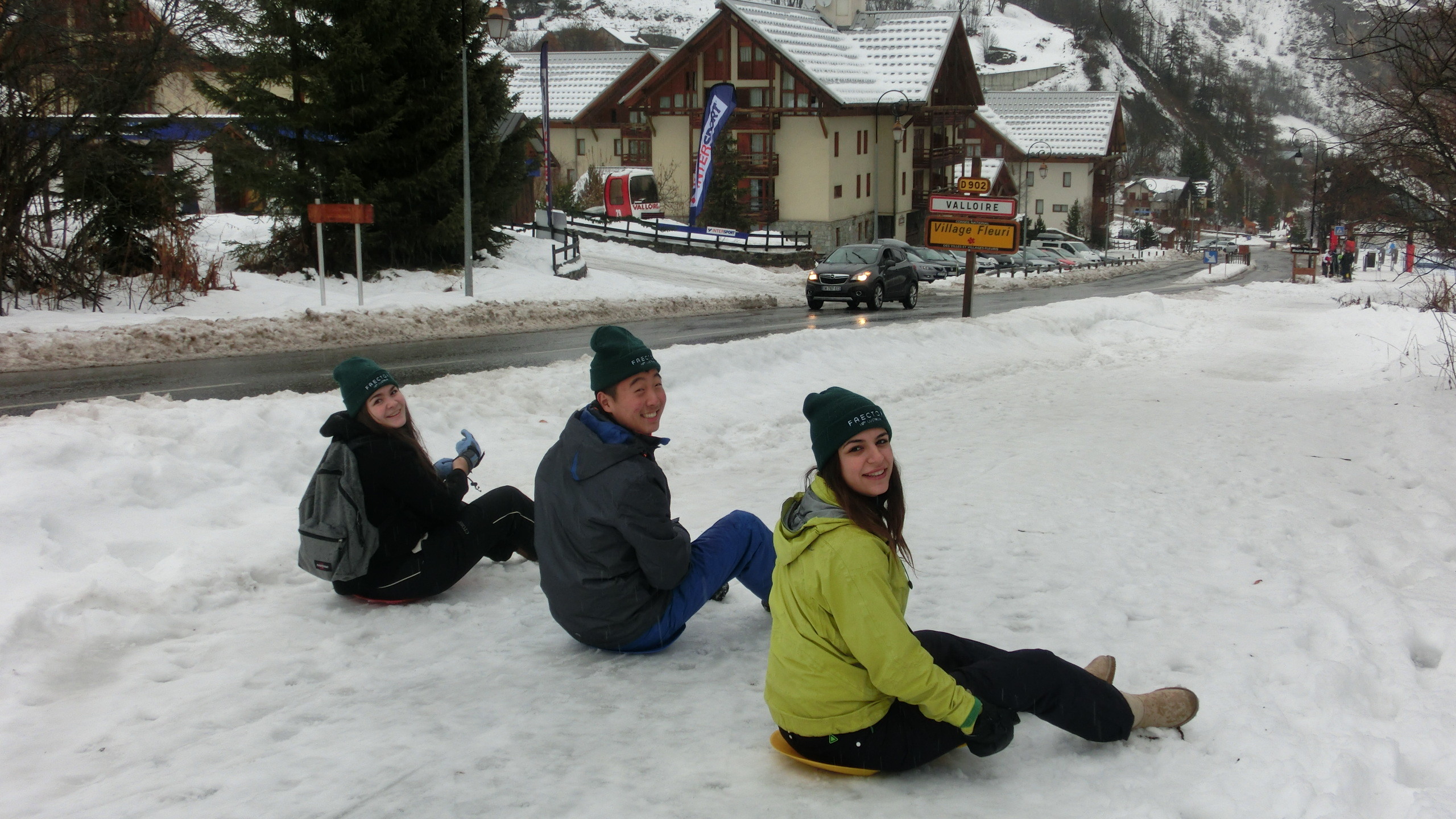 You know an event was a success when it is planned to do the same thing the following year. Marred by torrential rain, the members of the 2016 Lustrum Ski Trip were keen to see the back of the Netherlands, even if it meant a gruelling 16-hour coach journey through Belgium and Luxembourg; countries where, let's be honest, you only visit if you're passing by. Some students were eager to make the journey less arduous (that's another word for tiring, Dutchies) by getting absolutely trollied (that's another way of saying drunk, Dutchies). This is where I'd like to point out the greatest thing about Luxembourg: cheap booze! For the rest of us, this meant some tough hours of having to listen to them boast about how they were going to conquer the mountains during skiing, before they eventually passed into a deep-snoring sleep.

Finally arriving in Valloire, France, our ski resort, and having barely slept due to the constant waffle of some imbeciles about who exactly the 10th Pokémon was, we were ready to go! There was a wide range of skiing ability on show, from people who had never put on a pair of skis before, to people whose middle names were 'Black Slope' because they were so pro. The one thing missing from this first perfect day was the sun, but that's something they can arrange next year, I'm sure.

The French. The only hiccup in the weekend. From the start, it had been an issue communicating with them because of their lack of language skills and because of their inability to express human empathy. Also, when your tv's best channel is the music channel which blurts out French music half the time, you know you're in trouble. French music went from disaster to hopeless the moment people realised Stromae is in fact Belgian. This did, however, make chilling in the hostel less appetizing and encouraged us to go outside, something the next generation could perhaps learn from: switch tv's to French, it'll make you turn it off and go play outside. Furthermore François, the Michelin guide is a guide to the best Hotels and Restaurants by the French company Michelin. Ironic then that none of these restaurants seem to be located in France (apart from a couple in Paris perhaps). Valloire was no exception. The only good thing I can say about our children's portion of rice, a couple of chunks of fat, a bit of pork and the French waiters is that it made going to the bar a lot easier. The less said about the first night in Valloire, the better, as this was the night we realised we were the most polite, best looking (apart from Sjoerd Baardman) and youngest people by about 50 years in the village.

The snowstorm that hit the following day was more cold and bitter than my ex-wife (I'm joking, I don't actually have an ex-wife). The bravest amongst us dared the treacherous mountain, whilst the rest went to the restaurant where they had wifi to Snapchat their friends and show them what a wonderful time they were having. Needless to say, it wasn't long before everyone congregated back at the hostel for the next evening's festivities. Luckily for us, we had the handsome, charming and supporter of the 'age is just a number' cause in our group in Jeroen van Dijk. He slickly managed to weave his way into the hearts of a fellow group of Dutch 17-year-olds who threw a house party, to which Jeroen invited us all. Unfortunately, after a while, the French neighbours were annoyed by the happiness and joy that we radiated from the party, so got out of their beds to express these feelings. Fortunately, thinking outside of the box, Bob Muijs did his best impression of an angry German and the neighbours returned to their room.

In order to try to earn some extra money, the following morning the hostel employees started early with a room inspection, imposing heavy fines for every small detail which was out of place. Again, a fine example of French irony for calling something a hotel but getting the guests to run it. The last day of skiing was less dramatic and by the end, a sigh of relief was exhaled by the Lustrum Committee as no one had broken a leg the whole journey. The journey home I see as an homage to the Lustrum Committee for their wonderful effort to make this trip happen. Everyone spent the first couple of hours talking amongst the whole group, now friends, with a huge smile on their face, recalling their great experiences from the weekend. The remaining hours were silent as everyone drifted into a deep sleep, exhausted from their great experiences from the weekend. So it is with many thanks to the members of the Lustrum Committee that I conclude this article.