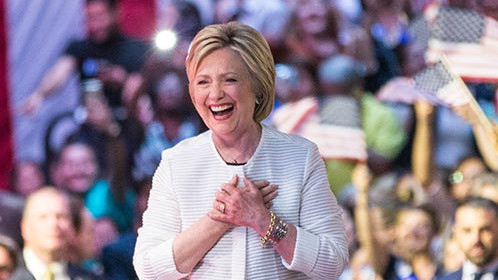 After tackling a tough opponent in the primaries and opposing to one of the most controversial (if not the most controversial) presidential candidates in the American history, Hillary Clinton is now expected to be the next president of the United  States of America by many political pundits. Although she has been a prominent figure in the Democratic Party for more than two decades, her vision for America and her political position is still considered cloudy by lots of people from both political camps. Yet, an inspection of Clinton’s past and campaign can actually give a picture of the future of American economy under her presidency.

The American voters’ impression of Hillary Clinton as a political figure is closely associated with her husband Bill Clinton’s presidency. There is a particular reason for that beyond their marriage: Clinton was a truly extraordinary first lady who was involved in many policy initiatives and carried a remarkable authority in the White House.

For this reason, she is repeatedly considered a “New Democrat” like Bill Clinton, who followed the “Third Way” idea which blends social progressivism with neoliberal economic policies such as the “Personal Responsibility and Work Opportunity Act”, the Social Security Reform Pact, which he and the House Speaker Newt Gingrich agreed on in a secret meeting, and of course, the notorious repeal of “Glass-Steagall Act” which separated commercial and investment banking. Because of this, the left wing of Democratic Party has been approaching her candidacy with strong scepticism and fears another neoliberal, deregulatory period under her presidency.

As a matter of fact, Hillary Clinton and her established rhetoric belong to the right wing of Democratic Party. Unlike the socialists and progressives of Democratic Party, she emphasizes “fair competition” rather than social state. However, the strong surge of left-wing ideas among the youth base of Democrats and the conditions seem to have Clinton pushed to more left in her policy choices. Contrary to her neoliberal, New Democrat politician image (and somewhat past), Hillary Clinton demonstrates a typical Democratic Party candidate profile in 2016.

The Hillary campaign proposes a package of regulations on the financial industry, namely Wall Street, including imposing a fee on the risky investments, taxing high-frequency trading and empowering judiciary to split up “too-big-to-fail” banks and make senior bankers responsible of their decisions. In addition, Clinton proposes a tax reform to close the legal loopholes which corporations and the Wall Street firms benefit. It may sound strange, but this package is nearly identical to Bernie Sanders’ proposals on Wall Street and can actually help overcoming the structural problems of financial industry in the U.S.

Another keystone in Clinton’s economic vision is to take certain measures to keep manufacturing in the U.S. and strengthen small businesses which will combat job losses and boost economic growth. These measures include imposing an “exit tax” on U.S. companies leaving the country to encourage domestic manufacture, simplifying business starting and tax compliance process, and reducing costs of starting a business and taxes on small businesses.

On the other hand, labour rights do not seem to be a main focus of the Hillary campaign. Although Clinton promises to restore collective bargaining rights, oppose international agreements that “don’t meet high standards” such as TPP and support the efforts to increase minimum wage to $15, there are no solid proposals on the issues she claims to support. Rather, the Hillary campaign considers vitalizing business through government spending on infrastructure, businesses and technology and workforce education a means of developing working place conditions, wages and jobs in general. Especially, $300 billion investment plan for rebuilding and expansion of infrastructure stands out as massive plan, although it is a modest proposal compared to Bernie Sanders’ $1 trillion plan. In addition, Clinton promises to introduce paid family and medical leave up to 12 weeks. If done, this could be Hillary Clinton’s most iconic achievement as a significant contribution to women's rights from the first female president.

The biggest shortcoming of the Hillary campaign for the progressive wing of the Democratic Party is probably its reluctance to promote Social Security and Medicare other than small expansions of Social Security and a vague promise to enhance the Medicare service. However, Clinton promises to make state colleges tuition-free for students from families with an income up to $85,000 from the beginning of her presidency and raise this upper limit to $125,000 until 2021. Besides, she promises a moratorium of three months, restructuring the college debt for borrowers to pay at most 10% of their incomes for 20 years and cutting the interest rate on college debt. The ultimate economic aim of her partly tuition-free and debt-free college plan is to emancipate the next generation of college graduates and so alleviate indebtedness in order to boost domestic demand and investment. For this reason, Clinton also promises to promote entrepreneurship by giving a chance for start-up owners to defer the college debt and get a debt relief up to $17,500.