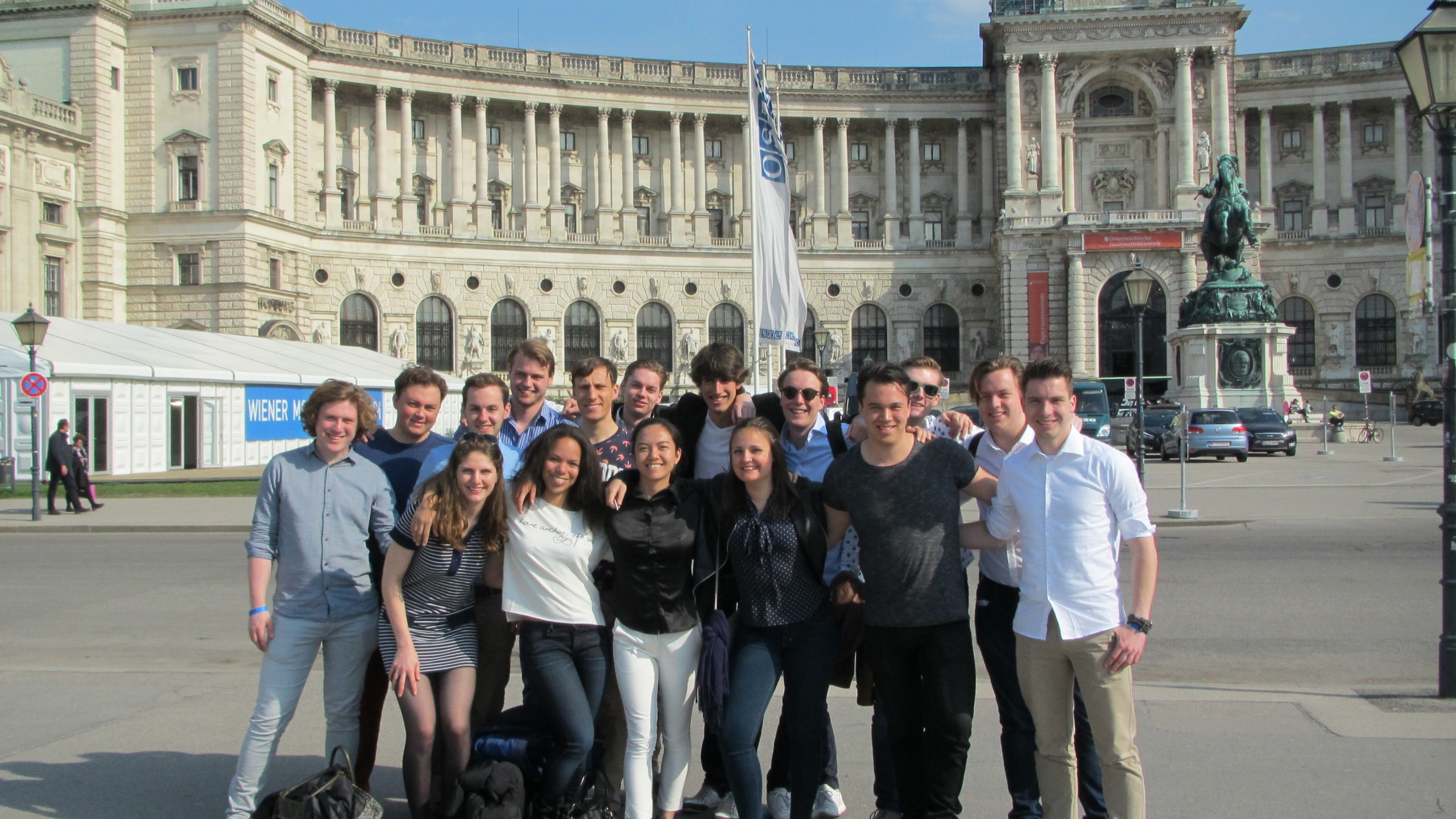 Monday morning the 24th of April. The alarm goes off at 02:30 am. After months of preparation it is finally time to start the long-expected adventure; FAECTOR’s first ever Business Trip with as destination Vienna!

The group gathered at Rotterdam Central station, from where we travelled to Schiphol. By the time we got off the airplane in Vienna it was only 08:30 am, so we still had the entire day ahead of us. We arrived at the hostel to drop off our luggage, and in the afternoon it was time for the first company visit: the Vienna Insurance Group.

We were welcomed on the ground floor of the building of VIG, where people from various departments were happy to tell us all about the company from their perspective and some of us even got some hints for a potential internship. At the end of the day we played some games at the hostel before going to bed early. You can imagine that starting the day at such an early (or late) hour was quite devastating! 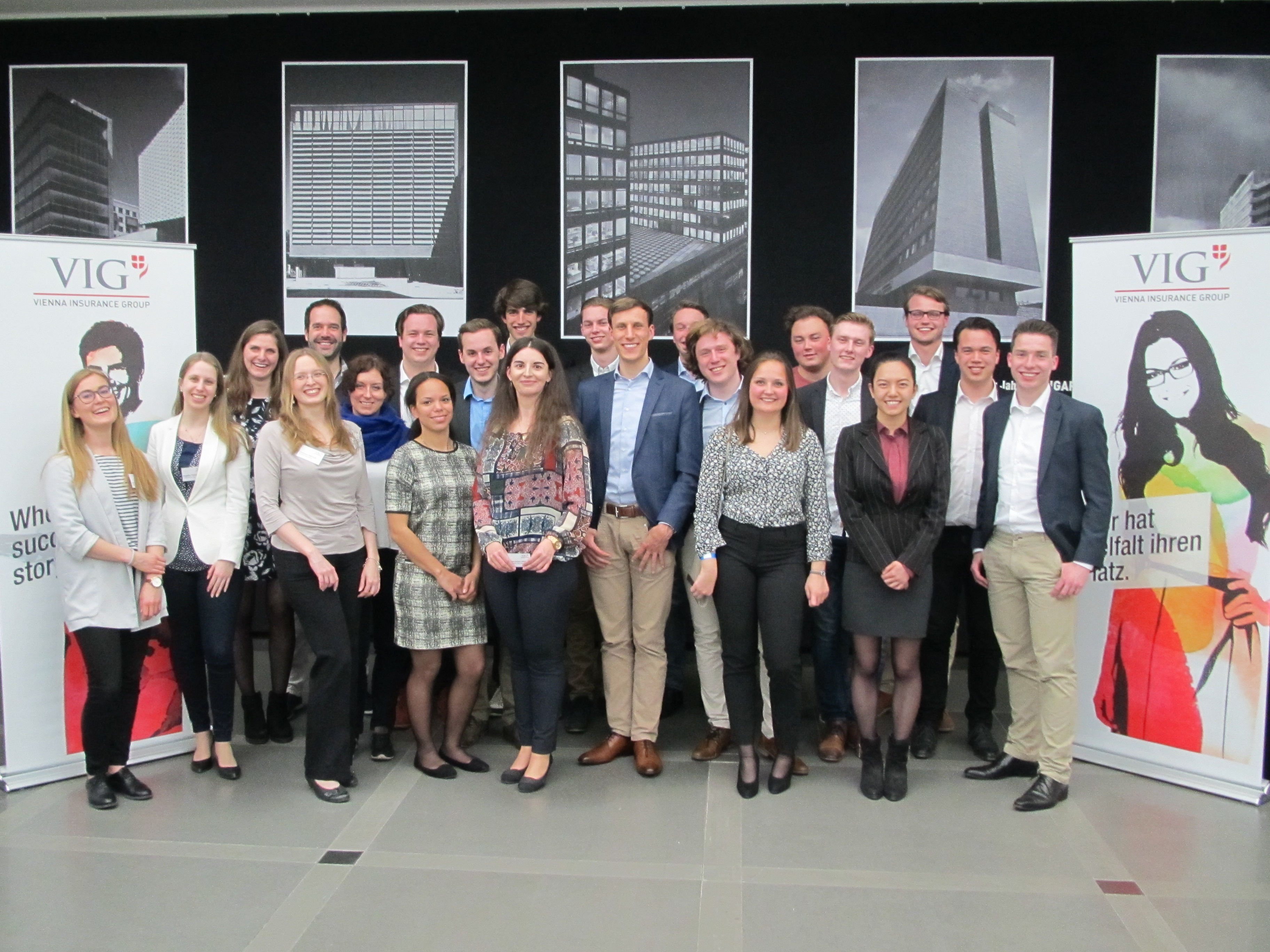 On Tuesday we visited the Austrian office of the United Nations, which is one of the four UN headquarters in the world. After a lecture about Sustainable Development Goals and a tour around the huge campus, we went back to the city centre for a walking tour along the must-see places and buildings in Vienna. Our tour guide Christopher was happy to show us all the highlights in the centre of the city and added some of his odd sense of humour, about Viennese cake and his grandmother.

We finished the day at the Travelshack, a well known bar for exchange students in Vienna. 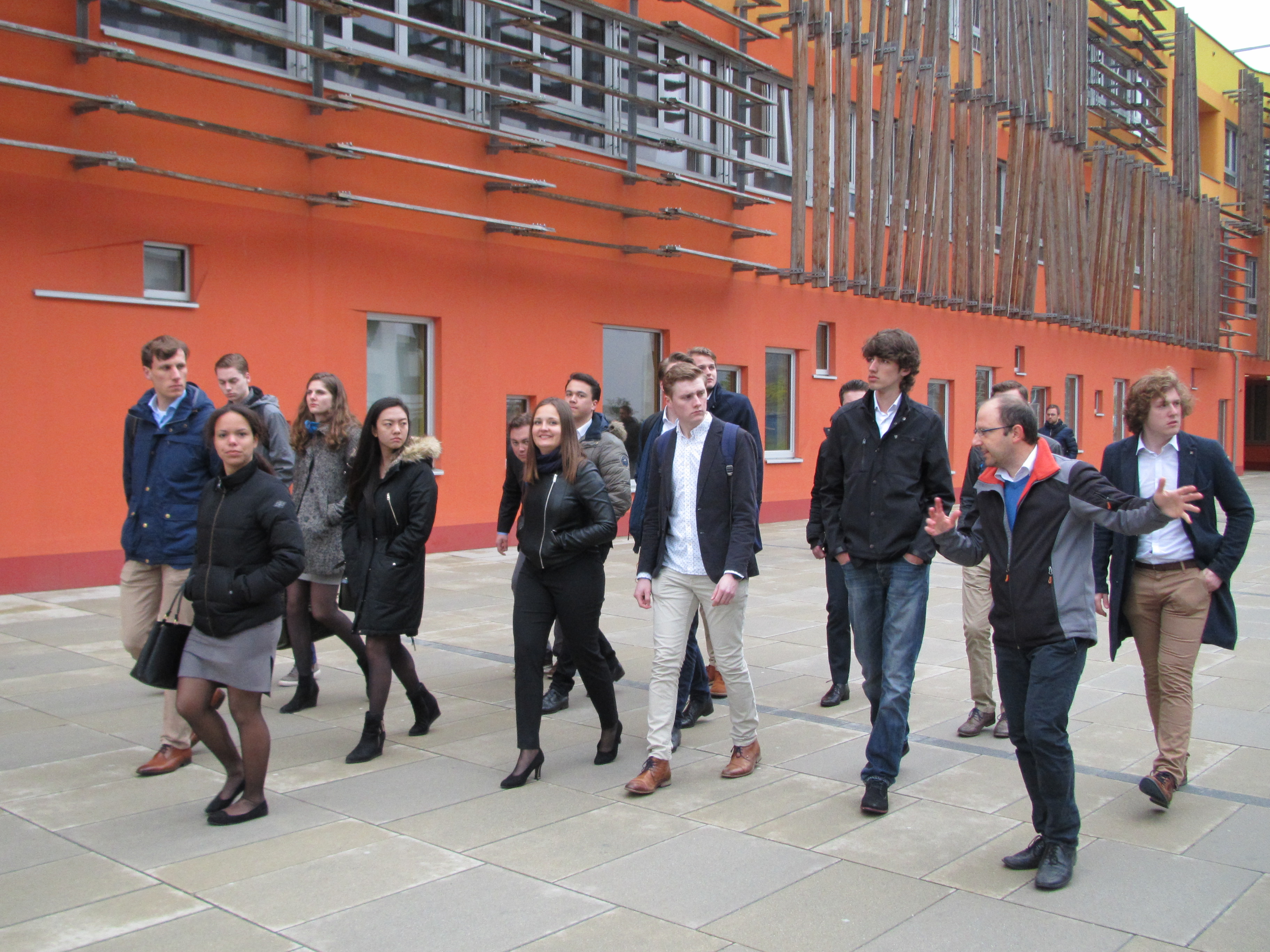 The ambassador and his staff welcomed us at his tremendous residence

Wednesday morning started with an appointment at the Dutch embassy in Vienna. The ambassador and his staff welcomed us at his tremendous residence (described by dhr. van der Voet as a “goeie unit”) and gave a presentation about the work they are doing in Austria for the Dutch government. After having lunch at an Italian restaurant where they, unfortunately, did not serve pizza’s with pineapple, we headed over to the office of Nestlé.

We got a nice presentation about the company and an interesting overview of the selection procedure, as well as some tips and tricks on how to write your CV and motivation letter and prepare for an interview. In the evening, we went to the local “Schweizerhaus”, which is an enormous biergarten located at the famous Prater-area. We ended the day at the rollercoasters in the nearby fair, where unfortunately some of us weren’t able to keep in all of the good food of earlier that evening. 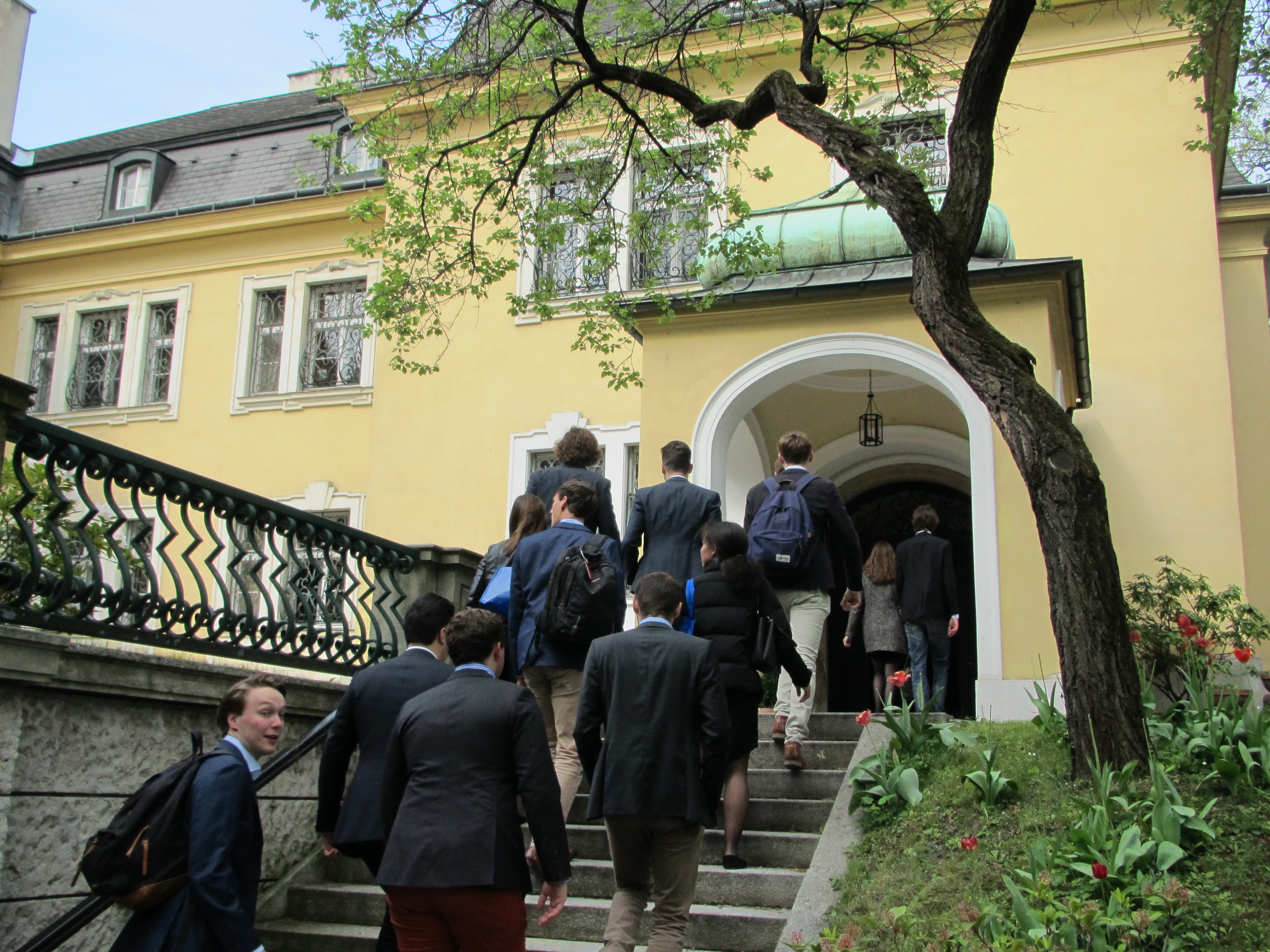 On Thursday we only had one scheduled activity: a visit to the Viennese Microsoft office. Although it was pretty early and some of us had even more starting problems than Windows, it was very interesting to hear about the New World of Work that Microsoft is expanding all over the world. Of course, also a little FIFA Tournament on the new Xbox couldn't be missed here.

Tess – Stupid was unanimously the biggest success of the evening

As it was Kingsday, we went into the city centre in the evening, dressed up completely in orange. After a nice Wiener schnitzel it was time to go to Café Pointers, where all local Dutchies had assembled for a night full of Grolsch beugels and karaoke (Tess – Stupid was unanimously the biggest success of the evening). 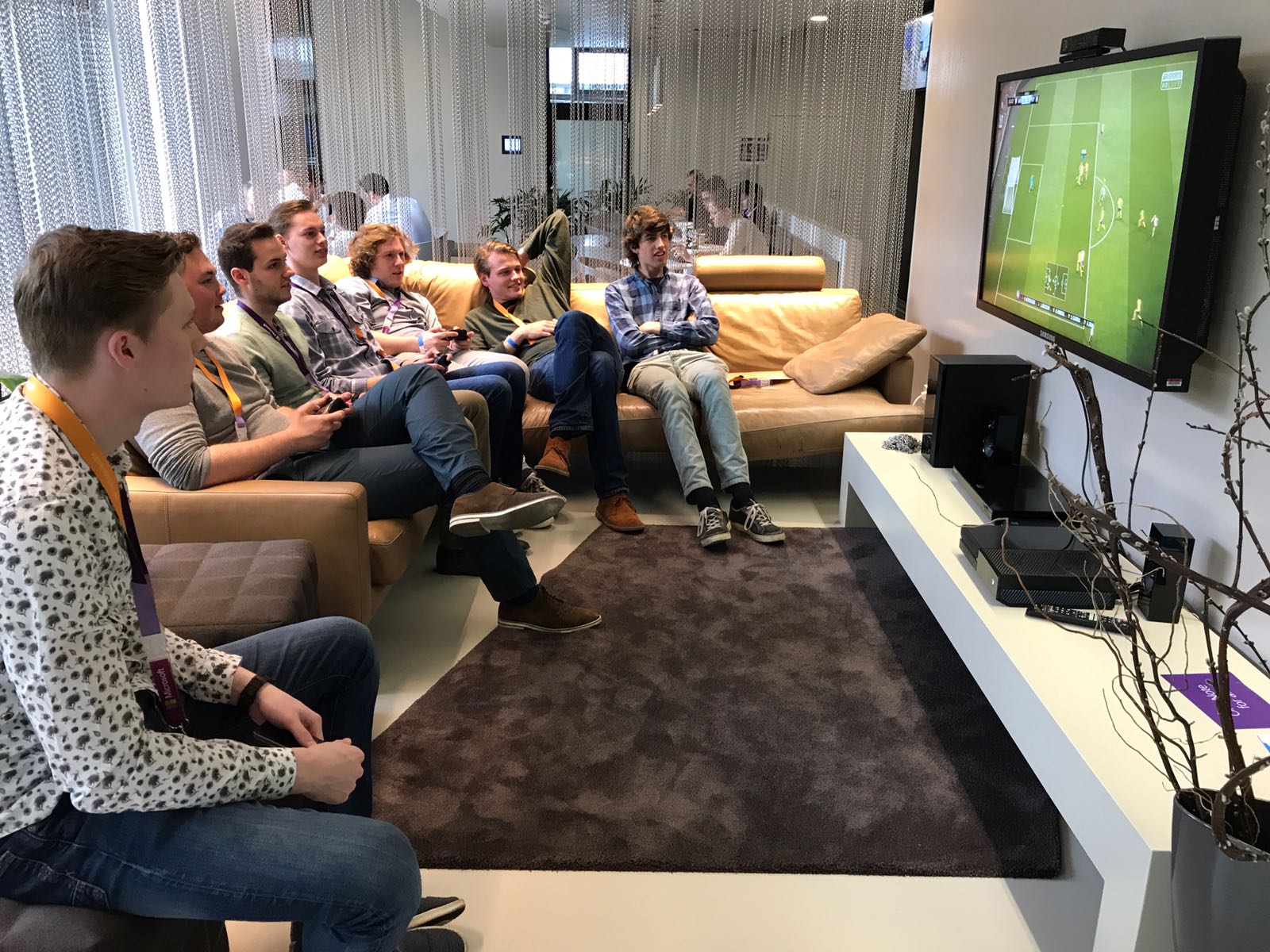 And then it was Friday, the busiest day of the week! In the morning, we visited the Wien Universität where we started with a short tour around the campus. Afterwards, we got a presentation from two Professors from the economic faculty about their Bachelor- and Master programmes, and we talked about the differences with our Econometric courses.

Later that day, we went to our final company of the week. We started our visit at Roland Berger with a lunch and an informal meeting with some of their employees, followed by a presentation about what it is like to be a Strategy Consultant.

We had our final group dinner at a nice grill restaurant, where our beloved ‘Vozitter ms. Louter gave a speech of which even Donald Trump could learn a thing or two.

As this was our final night in Vienna, we ended the day with a pub-crawl along a great variety of cafés, one where they served 50 different beers from taps, and ended up in a club. We didn’t have any activities planned for the day after, so we had the opportunity to fold some bakken and go loco in The Loco! 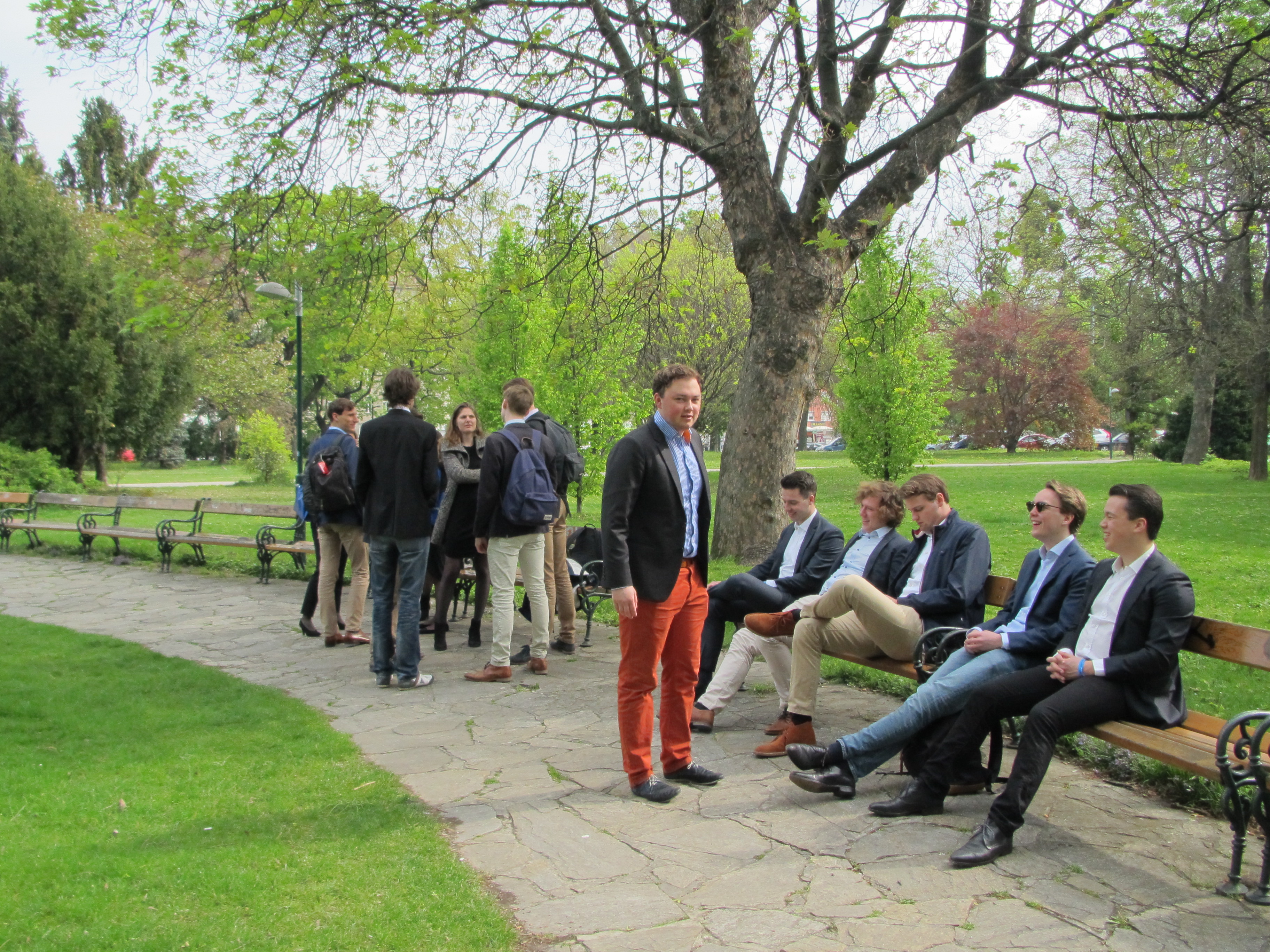 If there is one thing that I have learned this week, it is that everything revolves around the act

Saturday was our final day and we spent the day strolling through the city, playing some pool and shopping gifts for our loved ones. All good things come to an end and in the afternoon it was time to go to the airport and head back home. As we had a lovely pizza hawaii as our final meal of the week, Dhr. Tee blurts out a final quote that summarizes the week quite well: “If there is one thing that I have learned this week, it is that everything revolves around the act”. All in all, it is safe to say that the Business Trip was very noæce and we recommend everyone to join in next year!