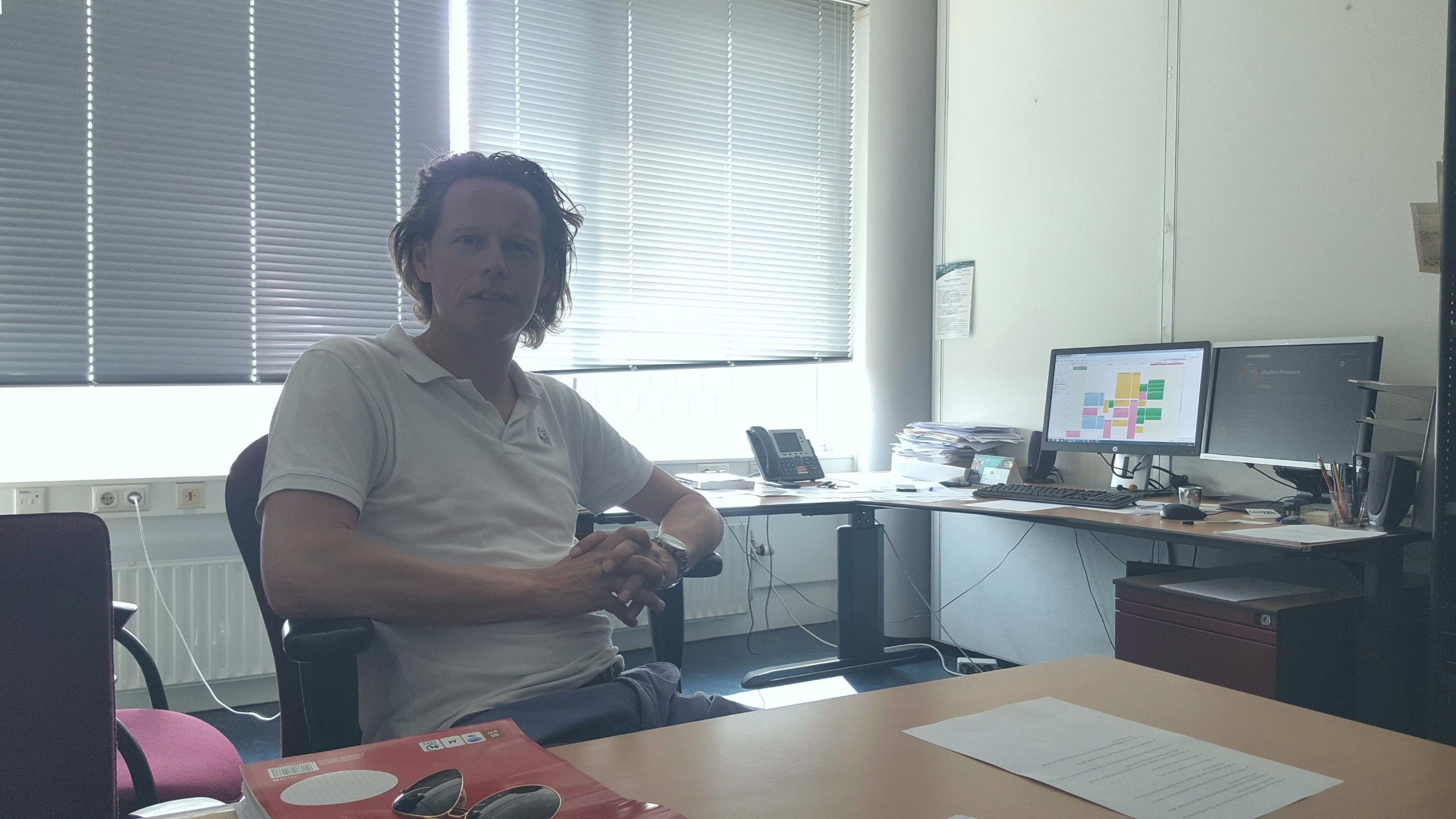 It's time for another teacher talk! This time, the FAECTOR Estimator interviews the first-year Statistics professor - Dr. Michel van de Velden. To find out more about our professor besides his publications, we decided to ask him some questions to make everyone familiar with how he is really like, outside of the lecture rooms.

How was your student life and how was the econometrics faculty back then?

Well, I was a student at Amsterdam in the 90’s. I started studying it because, basically, I did not know what to do, but I was still good at mathematics and liked it very much. I did not start out too seriously as it was the time you get funding for six years to study, so that made me think I should go for it for the full six years. I did put in effort overall as I did not want to fail the first year. However, I really started going at it in the Master’s year, so around 3rd and 4th year.

I had also went for an exchange in the USA for a year as things were going quite smoothly and I wanted to see how it is like there. That was the place where I met my Japanese wife and now I have Dutch-Japanese children who are bilingual. I actually did something else there for the year – I did philosophy and literature which turned out to be a problem when I came back because I had to show what I have studied. In the end, everything was resolved as I managed to do everything on schedule.

You did some research in Barcelona. What was the specific field you were working on in Spain and how did Spain affect you if it has in any way in your life?

It was straight after my PhD, because at the time, in academics, to get a job, you had to apply for grants. I saw one international grant for which I had applied and received it. What I had studied is closely related to what I do now and that is data visualisation, algebra, methods... Those were the main things I did my research on, but I had also taught at the University a bit. Concerning the issue on how it affected me – well, it is a very nice place to live and work. It provides an excellent international community and provides you various opportunities to do whatever you like. The place was filled with extraordinary people, and along with that, my eldest son was born there, so Spain did affect my life quite a bit. I had asked if that made my son a Spanish citizen, but it was apparently not the case. However, they did say he was Catalan then.

What made you decide to go into teaching and do you enjoy it now?

If I were to only teach, that would probably drive me crazy and the same goes for research

I really enjoy it. The thing is that if you work in academics, there is not really a choice between teaching and research – you have to do both, with some rare exceptions. When I was in Barcelona, for example, I had a purely research job. However, at one point, they did ask me to do some teaching as well which I really enjoyed as sometimes you need to balance the two out. It gives you an opportunity to get some feedback, explain some things you can use later on. Same holds here at Erasmus – there is not a choice between the two. What I can say is that if I were to only teach, that would probably drive me crazy and the same goes for research. Eventually, there comes a point where you really want to do both – the two really go side-by-side for me.

What is the most important thing you think an econometrics student should get from the courses you teach?

Usually, there is always a lot of focus amongst students on the issue where the things taught can be used in real life, or whether it will be used later in life, but that is not really an issue. It mostly revolves around the skills that the courses provide you with. In econometrics especially, you need to get to the basis, to fully understand how things work in general, which is why we do all the mathematical proofs as you can use those skills in many other areas.

So, even if you do not use the knowledge on the biased and unbiased estimators, the various tests, the processes you learn on how to obtain these are essential. Because now, with all the new technology, the computers, smartphones etc., it really helps you understand on how these really work. At first glance, it seems trivial on how it works, but yet it is so remarkable. That is why, with econometrics, you need some people who will go to the basis of these and fully understand them, if you really want to make an advancement. If you get stuck with the current applications, you cannot really go beyond that. Essentially, being able to grasp all the difficult concepts will be the most important thing for me, at least.

What would you say is the perfect sample size?

The perfect sample size is 'n'. This is because 'n' can be anything.

The perfect sample size is ‘n’. This is because ‘n’ can be anything. ‘n’ basically means you can plug in any number for it and this makes it very general and you can apply it for all sorts of stuff. This is, I believe, very important in the whole study. We learn all sorts of methods here which are not specific for only one thing, so it is very convenient to have such a number which you can apply anywhere.

Who would you say is your favourite mathematician?

My promoter was Heinz Neudecker, one of the first econometricians from Erasmus

I really do not have any favourite mathematicians or any idols, I must say. My promoter was Heinz Neudecker, but he was not a mathematician, but one of the first econometricians from Erasmus. He is most famous for his book, with Jan Magnus, on matrix differential calculus which is used a lot by econometricians. However, he would not be considered a mathematician – he probably would not prefer to be called that. He was always very precise and would claim that we do not accept something to be true if somebody says it is true – you should be able to verify everything, and if somebody would say something is easy to show, he would ask for the proof. Never would he accept a short proof which would require you to think for days, but something always fully accurate. Other than him, I do not have favourite mathematicians nor statisticians.

Do you have a favourite formula?

Also not – I often see other people’s answers and think to myself: “Yes that sounds quite cool”, but for me, not any in particular.

Do you have a favourite football team? Do you play football and if so, what is your favourite position to play at?

I do – that will have to be Ajax, although I am not sure if that is an advisable answer, but it will definitely have to be Ajax. I play a lot of football myself and my favourite position will have to be the centre. Now, I play football every Saturday – both indoors and outdoors, but I do try to make it at least twice a week. It was always my passion. I had stopped for some time when I started studying, and then after 2-3 years, I picked it up again with my friends and other students. I have just made it for the transfer to the "old-people" football, for people over 35 (veteran football).

Do you have a favourite TV show/character/series/movie and if so, for what reason?

I would be sunglasses: Be right in the sun, cool, having an overview of everything

I like a lot of comedy shows and movies. I liked Seinfeld a lot. Comedy Central had Louis C.K. And, on Netflix, I watch Fargo. It is not really a comedy, but I think it is a pretty good series, however I do not really have time to watch it. Some of these are designed to keep going and keep the audience wanting more and I make the effort to resist that – I have quite a discipline. I watch some of these Netflix series with my son and he is always like: “One more, one more!”, but it is better to save them for another time at some point.

If you were a piece of clothing, which one would you be?

That is a very hard one. This question kept me busy, but I would have to say sunglasses. I would be right in the sun, cool, having an overview of everything.

Lennon or Ray-Ban or…?

Definitely Ray-Ban, not so much the Lennon.

I have these strong red sneakers. My son said they looked cool and I had to buy them, I guess

I would not know what else to add. I do not have a hobby like Wilco has fishing, I am not into that. Not many secrets I would like to share, but when it comes to music - Wilco is a great band, I love them. They are from the US. They fall into the genre of indie-rock. And I have these strong red sneakers. My son said they looked cool and I had to buy them, I guess. He has the strong yellow and green ones – that is too much for me, but the red is pretty OK and they are very comfortable.