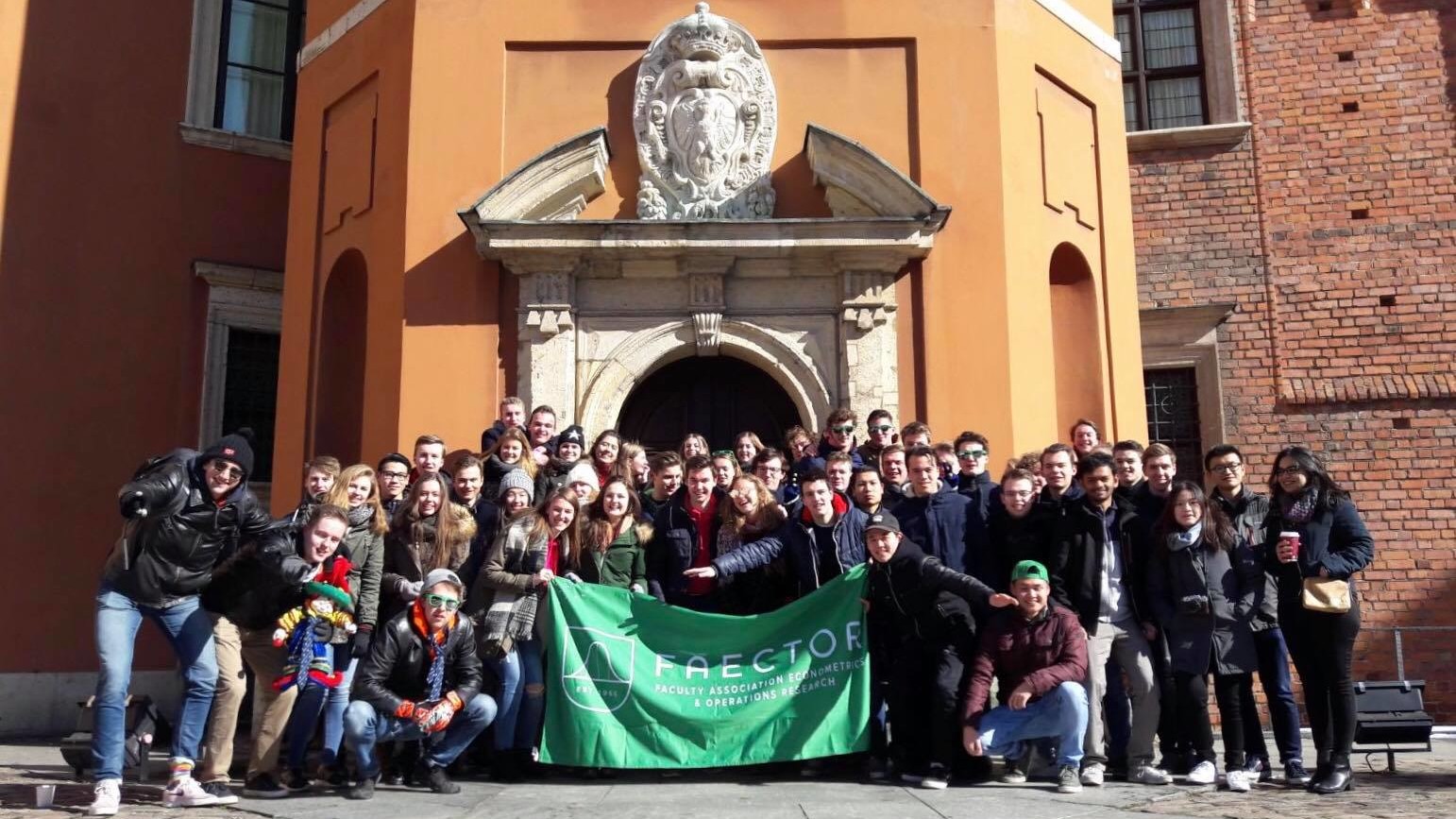 Dzień dobry! Exactly a week ago, the wonderful city trip to Warszawa took place. A group of around 60 FAECTORians had the time of their lives in the capital city of Poland. It was an amazing weekend that will surely not be forgotten. Curious what they did during the weekend? This article will try to give an impression of the amazing trip!

The flight was quite early and even though everybody was really looking forward to the weekend, most of the FAECTORians would probably have preferred to stay in bed a little bit longer. However, right from the start of the journey in the train, everyone made one big party out of it (sorry for the people having to cope with this early in the morning).

Once we arrived in Warsaw and got to our hostel, there was some free time. The people split up in smaller groups, though most people ended up in Browarmia Królewska, where everybody could enjoy delicious food. A typical Polish dish some people took as a starter is pierogi, which are basically dumplings with a filling such as meat. Alongside the courses, people could enjoy a glass of beer. The thing with Poland is that the sizes of the beer are a little bit different than we are used to. The unwritten standard for beer is pretty big compared to Dutch standards: 0.5 litre. Apart from that, you have the choice of a small or big beer. Beware though that this is different from the Netherlands: when the waiter asks for a ‘small beer’, he actually means 0.4 litre, which leaves you wondering what the big size then is? Well, a big beer is 1 litre. Most people went for the 0.4 litre, except for some ‘grote meneren’ perhaps.

After the lovely dinner, the first activity started: the pub crawl. This was organised by a Polish organisation who knew the best spots for the night. In total we visited four places, all of which were very different. The final destination was Room 13, a club. The club was packed with people all in for a good party, and that is what they got.

Moving on to Saturday. For the day, the group was divided into four smaller groups that would spend, quite obviously, the day together. There was a ‘Crazy 52’: a game where you have to do random assignments throughout the city, while also enjoying the nice squares, colourful buildings and cosy cafes (so sight-seeing was no problem).
During the day there were also two other activities: an escape room and a Gear VR studio. There were three differently themed escape rooms: medieval, time-travelling and museum. All were very cool, but an especially intense experience was in the medieval escape room, that consisted in total of three different rooms. To get to the last one, a person had to lie in a coffin that came out of the wall, and had to be pushed back (not knowing if and what he would find at possibly ‘the other side’; only to find out later this was the last room). Most groups relied on a brave guy being willing to do this, while the girls already nearly fainted just by the thought of having to do it.

In the Gear VR studio people could play different games, ranging from a peaceful underwater-experience to a horrifying one with zombies (you could hear the guys scream).
The next activity of this already full-packed day, after dinner, was a shot bar (yep, right after dinner; good start of the night). People could enjoy themselves here by dancing until we went to Club Mirage.

Whereas most clubs in Rotterdam are quite basic, this one was nothing like most people had ever seen before. In the middle of the dance floor was a fairly big fountain! And around the round dancefloor, there were bars and tables where people could enjoy a drink. This was again a successful night where people danced the night away.

The next day we visited the red Royal Castle, which is a must-have on the sightseeing list of Warsaw. We first of all took a group picture (smart to do this after two days of partying ;) ), and then visited the castle. The castle has a lot of rooms, and especially fascinating is the fact that they are quite different from each other. Some were almost entirely covered in gold, while others were completely white and again others seemed to be a bit more modern with grey walls.
After visiting the castle, people had some free time until we would be having our last dinner together. This time, we went to a beer brewery to eat hamburgers. The hamburgers were delicious!

For the people who still had a voice left after this weekend, they had the opportunity to show off their singing talents in an underground karaoke bar. Eventually, everybody joined in and we sang all the songs as one big group. This karaoke bar was also immediately the last activity before the dreadful moment had come: we had to leave Warsaw.

Whereas the people were full of excitement on the way to Poland, the bus was now mostly quiet except for some music and people reminiscing about the past weekend.

All by all, it was a great weekend, filled with a lot of sightseeing, laughter, dancing, eating and beer (talk about cheesy). Dziękuję Activities Committee for the wonderful weekend!