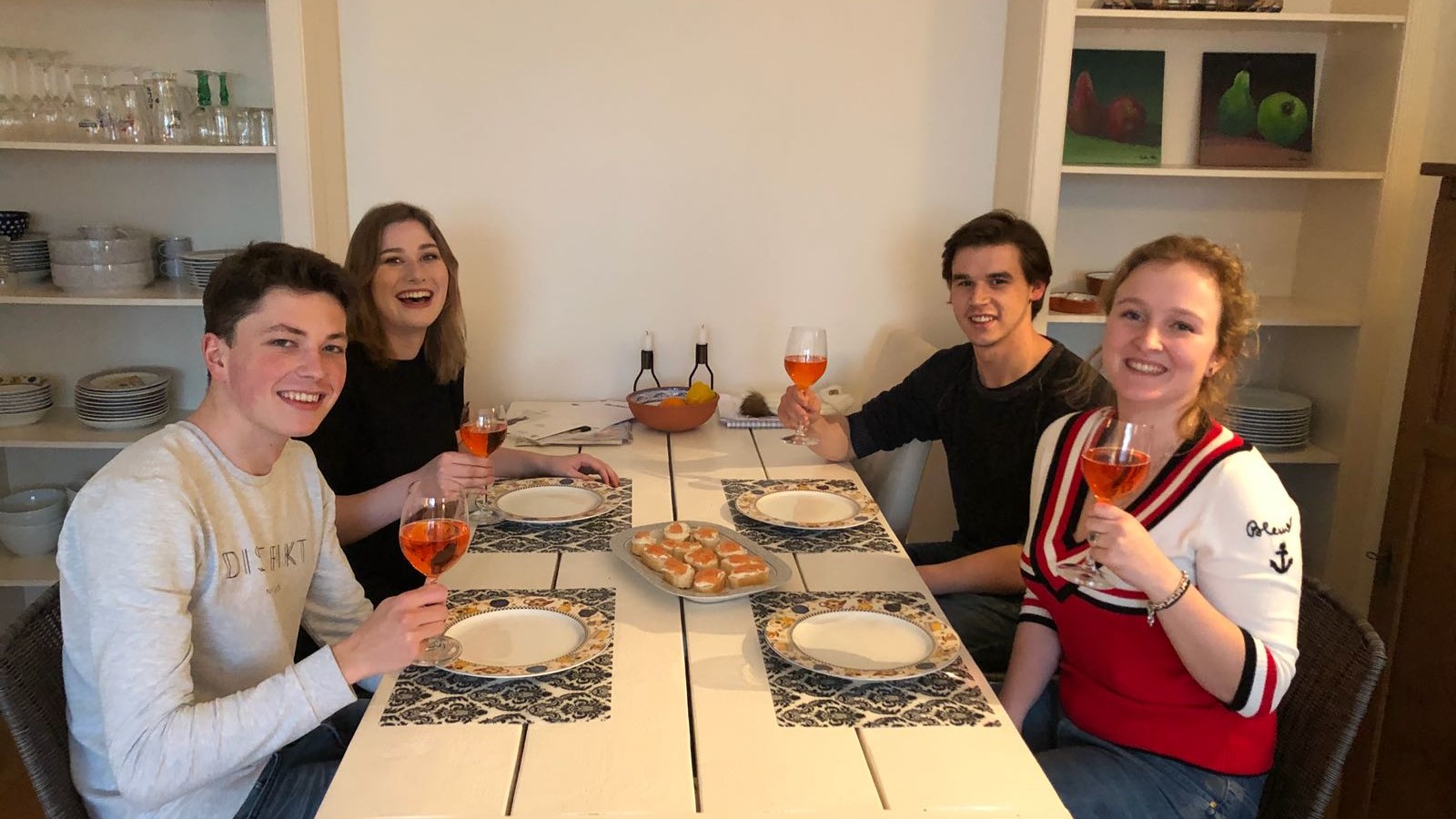 Estimator presents to you a new rubric: EstimATEor. In this series of articles we will interview internationals while having a classic dinner of their country with them. This way we get to learn about their cultures and experiences in Rotterdam and do what we love to do: EAT. We had our first dinner with Luca Zampierin. Maybe you have already heard of him, since he is a member of the Freshmen Committee.

Luca started the Bsc2 program this year and is 20 years old. He is originally from Bassano del Grappa, a city close to Venice. When he finished high school he studied International Economics for 1 year in Bologna, however he found that he wanted to do something more mathematical and moved to Rotterdam.

We first enjoyed a very tasty antipasto: ciabatta with Philadelphia and salmon.

How was your life in Italy?
I grew up in Bassano del Grappa and come from a big family, I have 3 siblings. Family is really important for me, events like Christmas and Easter are very valued. Maybe also since my parents were really religious, we went to church every Sunday. I studied for a year in Bologna, however I wanted to do something more mathematical and also the Italians are not very good in english. From my study 95% was Italian and only 5% an international. Rotterdam is a really international city, I went to an open day once and decided to study econometrics and economics here.

What did you expect before you came to the Netherlands? Did your expectations come true?
About the program, yes. It meets all expectations. I was expecting an international environment. Actually the expectation I had was that the internationals were on one side and the dutch on the other side (that’s the way it was in Italy). Here that is also the case, but I also found with FC and FAECTOR that I am able to spend time with the dutch people, which I really like.

Then Luca served us a delicious penne con panna e salmone. As a real Italian, he did not put any vegetables in it, however he did add a lot of salt and of course there was some wine present. Yummy!

Did you have any difficulties when moving to Rotterdam?
It was difficult to find a room which is cheap, in the end you just end up with things related to university because you don’t know better. Now I live in the Blaauwe Molen. Also, it was difficult to apply for the university. I still don’t have my diploma from high school, I’ll probably get it only next year since they are still printing the ones the year before me. I had to send a lot of documents and translate them, this took a while. I applied in November already, however I sent my last document in May. This all cost me a lot, because it was 100 euros for letting something translated. This I would say is just an Italy problem. Besides that moving into Rotterdam was okey.

Tell us your opinion on Dutch people!
At first I thought they would have been more closed, but actually Dutch people are quite open, really social, and open-minded. People here always want to have lunch together, I like it. I was surprised by this in a positive way. I also like that Dutch people are open-minded.
I was shocked though that Dutch people are so direct. In a meeting someone was saying bullshit not useful for the meeting, someone just said this very directly. In Italy you don’t say that. But I really like this.
I was really surprised by all the study and student associations here. Thanks to FAECTOR I got to know a lot of people. I got to hang out with dutch people, while most international people only hang out with international people, which is really sad. In Italy, you’re just a number, they don’t care much about your life. Here, they want students to be active apart from their study. You get to have a life next to studying, very nice!!

Are there also some things you do not like about Rotterdam/the Netherlands?
Easy! The weather, that was really difficult to adapt to.

We ended the night with some pieces of Tony Chocolonely Easter Chocolate and some interesting dilemma’s.

Pizza Hawaii is the worst out there!

Rotterdam or Rome?
To live in Rotterdam, because Rome is a real mess. It is difficult to move around the city, they have their own driving rules. It is nice to visit Rome though!!

Cantuccini or gelato?
I would go for Ice cream, however tiramisu is the best dessert there is.

Pizza Hawaii or Spaghetti with vegetables and without salt?
Geez, that’s a difficult one. Pizza Hawaii is the worst out there so I’d have to choose the latter.

We really joined having dinner with Luca and hearing about his life before and in Rotterdam. Would you like to be in our next episode of EstimATEor, do not hesitatie to send us an email on estimator@faector.nl!