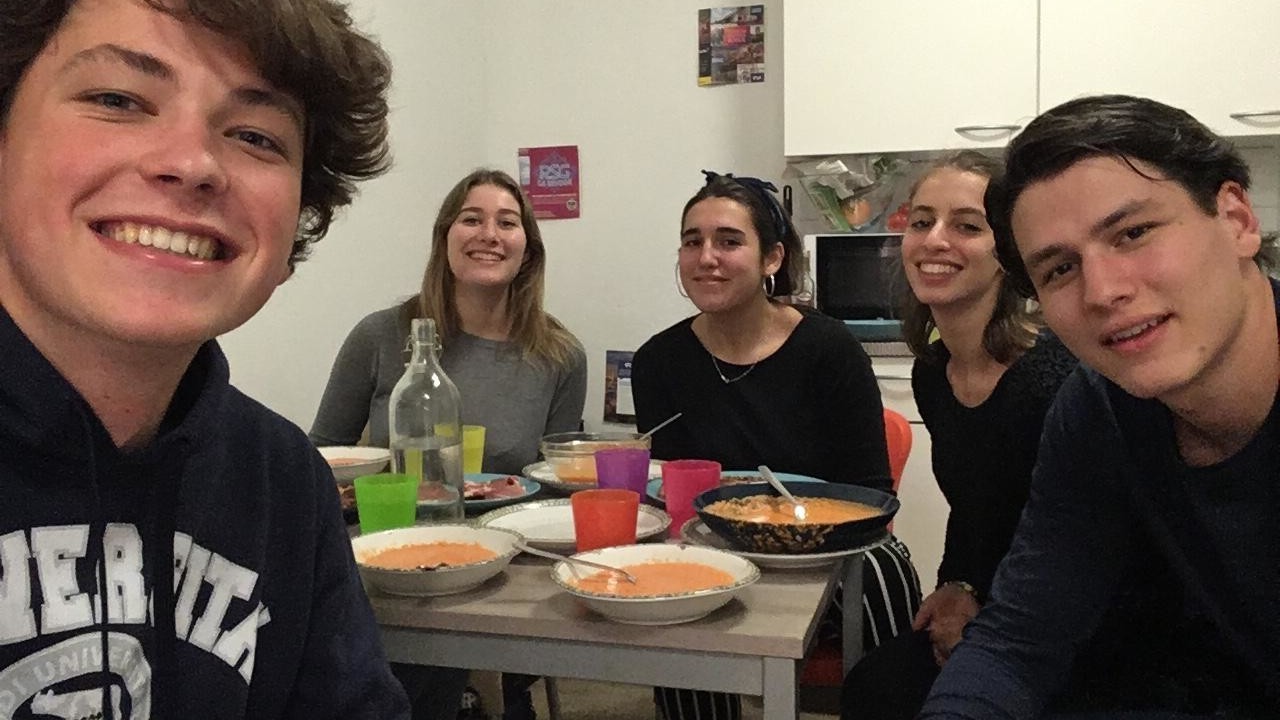 On Monday the 5th of November, we joined Sara Marqués and her best friend Selene Bruni, both first year BSc2-students, for a typical Spanish dinner! This dinner consisted of Gazpacho as a starter, and Tortilla con Patata as our main dish. Sara even offered us some typical Spanish jamón (ham), which was extremely tasty. While enjoying these delicious dishes, we asked them some questions to get to know them better.

Have you lived in Spain all your life?

Sara: For most of my life, I have lived in the capital Madrid! This changed, when I decided to attend a British school in England for approximately 2 years time. After I came back from England, me and my parents moved to the center of Madrid, so that our house would be closer to the British school in Madrid, where I continued my A-level courses and eventually graduated.

Aha, okay! But why in heaven's name did you decide to leave the beautiful weather and come to Rotterdam to study here?

Sara: I was planning to go abroad anyways. Most of my friends were going to a college in the UK, especially in London. I applied for King's College and Manchester, and also got accepted. However, these curricula were mostly economics-based. I wanted to do something more mathematics-based, and that's why I decided to come here!

Selene: But indeed, the weather here is terrible! It's so cold nowadays... However, since it's more windy here, as compared to Brussels, where I used to live, I feel like the sun is shining more as the clouds go away faster. So that's a plus!

What did you expect before you came to the Netherlands? And Did your expectations come true?

Sara: I always thought Rotterdam would be smaller than it actually is, especially compared to Madrid. But Rotterdam is quite a big city as well!

Sara & Selene: Also, we thought Dutch people were not going to be interacting with internationals whatsoever. However, we have some Dutch friends we hang out with during FAECTOR events, which is very nice! 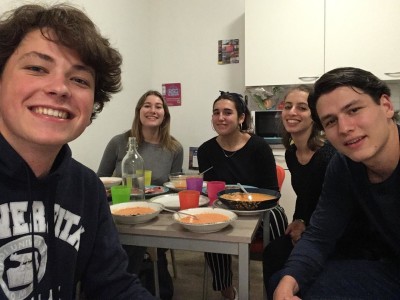 Did you run into obstacles when you moved here?

Sara & Selene: During the open day, we found out about this place, Hatta. They also told that it's very difficult to find a place to live in Rotterdam, especially as an international student. That's why we decided to sign up to live in this building (Selene lives on the 4th floor, Sara on the 5th). That's how we got to know each other, and ended up being good friends!

Sara: However, I had to get used to the biking culture in the Netherlands! Everyone bikes, even when the weather is bad. In Madrid, I used to take the metro, or perhaps even a taxi.

Sara: I actually fell down while biking here! I wasn't really paying attention, as I was talking to my friends. I didn't see the other bikers approaching, and I had to make a quick turn in order to avoid them. Unfortunately, I fell down, and I had a huge scar on my face.

Did you join any associations, or do you think about joining one next year?

Sara: I wanted to join the Antibarbari football club, but the training schedule was too intense. Someone told me I had to train three times a week, and play a match on Sunday. I just wanted to wait and see how the first year goes, and if I'm going to have enough spare time to go to practice. I also thought about joining the Ragnar swimming association, but the pool is located very far from campus.

Sara & Selene: We signed up for a try-out session for salsa dancing! We actually liked it, but those lessons conflicted with our university-schedule. Maybe we'll join these classes next year. Otherwise, we'll just stick to the gym!

What do you think about Dutch cuisine? ;-)

Sara & Selene:  The Dutch have good and tasty vegetables, but they have NO clue how to use them! They could possibly make some delicious dishes, but instead blend everything together into soups or something like that. Also, it's very weird that the Dutch eat sandwiches for lunch, we usually eat something warm. We have tried the kroket and the frikandel, and they were actually very nice! In the EurekaWeek, we tried poffertjes, and we liked it as well.

Sara: However, Dutch cuisine is a lot better than English cuisine!

Selene: By the way, the first time I ate a Kapsalon was back in Italy. When I moved here, I saw that you guys were eating them too. I looked it up, and indeed: The Kapsalon originated from Rotterdam. I was pleasantly surprised when I found that out!

What do you do in your free time?

Sara & Selene: We go to the gym together. And when we're feeling like going out, we usually try the VIP Room. However, we're still 17, so unfortunately, sometimes we do not get in. But HAS is always a good alternative in that case!

And we definitely agree! Thanks for having us over, we really enjoyed the food and the interview. Do you also want to be interviewed by the Estimator? Do not hesitate to send us an email: estimator@faector.nl :)