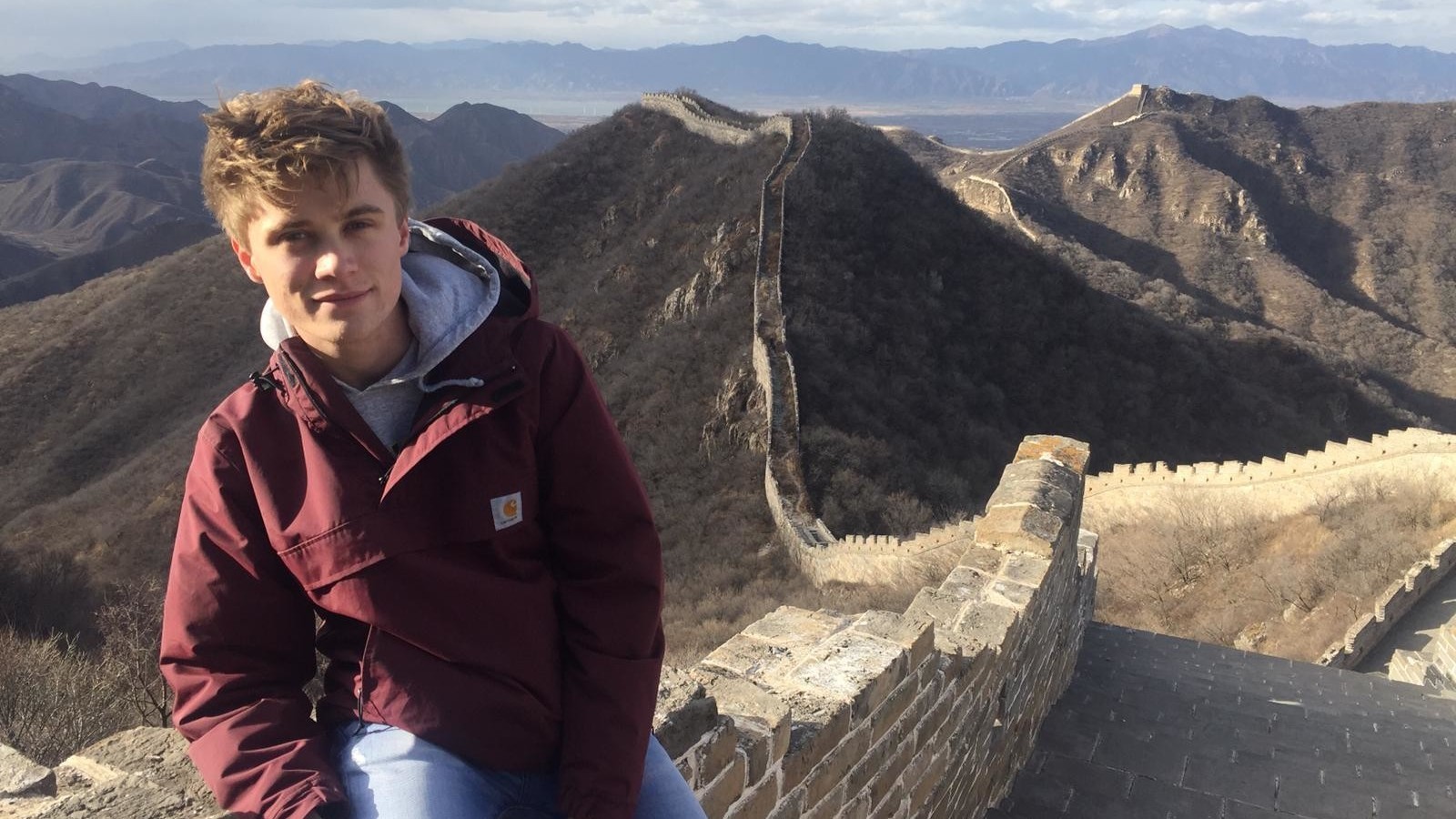 你好大家!
My name is Fabrice van Roozendaal, and I just returned from my exchange at Renmin University of China, in a city of almost 22 million people: Beijing. This huge city was my home for almost 4 months, and my perception of China has changed forever. 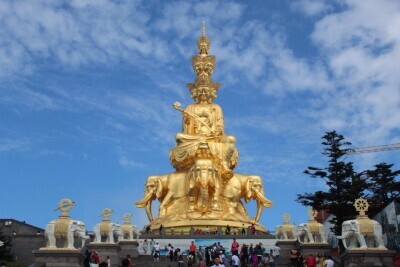 I started the first two weeks in a shared dorm room with a nice roommate. Luckily I was high in the waiting list for the single rooms and got a room for myself. The campus is small compared to the other universities like Beijing University and Tsinghua University, but it is very cosy and has some nice places to relax and have something to eat or drink with your friends. The campus had its own metro station which was very useful to go places. However, Beijing is HUGE, and most places take easily around 30-40 minutes in the metro only. If you like walking, you will love Beijing, but luckily there is a cheap version of Uber for quicker transport. And as autumn and winter are the dry seasons for Beijing, it does not rain a lot, making walking not such a horrible option.

I always thought China was a bit behind Europe and that we are the innovators of the world. In some ways this is true, but we can learn a lot from how they do things in China. In China, your phone is your everything. In China, Whatsapp, Instagram, Facebook, Snapchat, Google,… most things we take for granted are blocked. And although these apps can easily be accessed using a VPN, the Chinese have made their own apps to spend their time on. Wechat is one of them, and it is in essence what Whatsapp is, but with so much more. With Wechat you chat, pay, order food, translate your Chinese menus, order a taxi, use the metro, book hotels, book train and airplane tickets, and probably many more things I haven’t discovered. In most canteens, taxis, clubs, and shops they will probably not accept cash and ask to pay with your phone, so without your phone you are almost helpless in China. Even all the formal contact with your professors will go through Wechat… And this is just one example of those things that really amazed me in China. 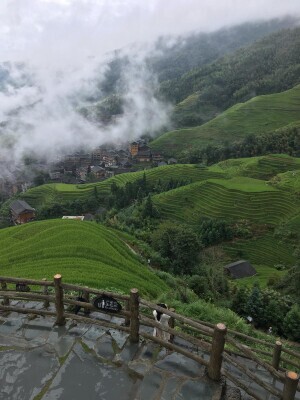 One of Fabrice's favourite spots

The people are very friendly in China, especially in places where they do not see many Westerners. They like to take pictures with you so they can show their family they have an ‘international friend’ (really happened to a friend of mine) although you are complete strangers. People are very helpful and like to talk to you. However, they can also be a bit rude and unhygienic. Some spit everywhere, it is not a pretty thing to see. They are also not shy to push you away to pass through in the metro, and they stare… a lot. But it did not bother me too much and you do get used to it.

My life in Beijing was quite relaxed. I chose my classes well and had classes only on Mondays, Tuesdays and Wednesdays, giving me nice long weekends. With this time I could explore the city and make trips during the weekends. Beijing has a lot of culture to see, more than Shanghai has. Shanghai is truly a working city, but Beijing still has a lot of old neighbourhoods (hutongs) and a lot of temples and old palaces.In my free time I visited famous cities like Shanghai, Tianjin, Xi’an, Chengdu and Hangzhou, but also less famous cities like Datong, Taiyuan, Guilin, and Hohhot. All of my trips I did by train as this was so easy, convenient, and fast. Besides these travels, I also spent a weekend camping on the Great Wall of China, which was really an amazing experience. 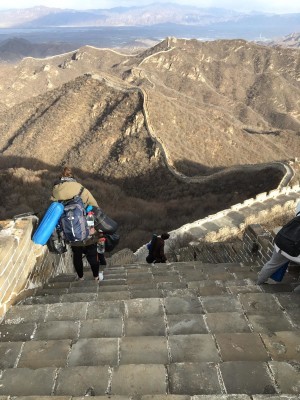 My classes were easier than what we have in Rotterdam, like most people will tell you. Failing is nearly impossible (I have not gotten my grades yet so *knock on wood*) as the teachers are too nice. I took two business classes, an economics class, econometrics class, and a Chinese language course. So quite diverse. The language course was taught old-school style where you repeat what the teacher says for almost 3 hours, and you do learn quite a lot, but I would say you learn the most by practicing in places like restaurants, taxis, or when travelling. Definitely not everyone understood me, but I tried. 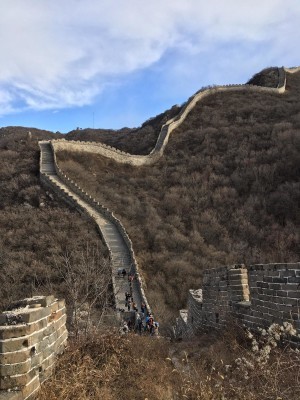 The nightlife in Beijing is also quite vibrant. To summarise, there is the student district Wudaokou, and the fancier district, Sanlitun. We went to Wudaokou more as it was closer to campus and we enjoyed it a bit more in general. It is very common to get free entrance AND free drinks, simply because you are a foreigner. Promoters (who you simply talk to on Wechat) can also get you in for free with free drinks as they literally get paid to do so. Local Chinese people also love to give you stuff for free like expensive alcohol to basically show off their money.  Going out in Beijing was great, but now I’ll need to get used to Dutch clubs again.

And of course, the most important part, the food. As you can imagine the food was amazing. There are little Chinese restaurants everywhere that make food from all different regions in China. The food is so diverse and it is so cheap. Your average ‘simple’ meal will cost around €1,5, and if you go out for a nice Chinese dinner with your friends with some drinks it will rarely go above €8. Beijing cuisine has a lot of meat in it and can be quite greasy and heavy. I really enjoyed the noodles with donkey meat (yes, donkey), it is one of the better things I ate in Beijing. Other foods like Peking Duck, hand-pulled noodles, dumplings, and lamb skewers were some of my favourites too. I really had no problems with eating Chinese food most of the time, but you can also find Western food, which will not be great and quite expensive. 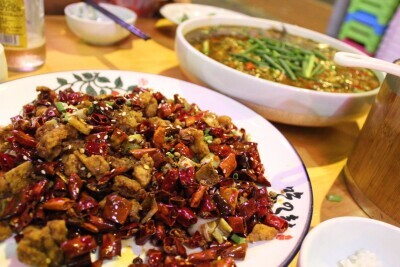 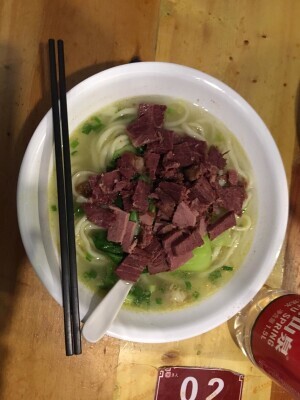 Overall, I really enjoyed my time in China and I encourage anyone who is doubting to look into it. I met some great people and saw beautiful places, but I probably haven’t even seen a quarter of China. I will definitely try to go back and see (and eat) more, because those four months definitely weren’t enough. But for now, I will have to return to my life back in Rotterdam. 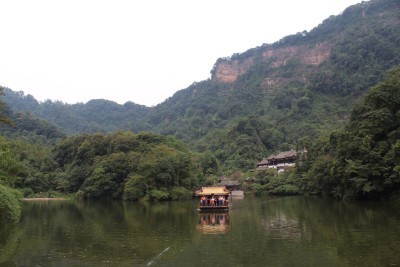