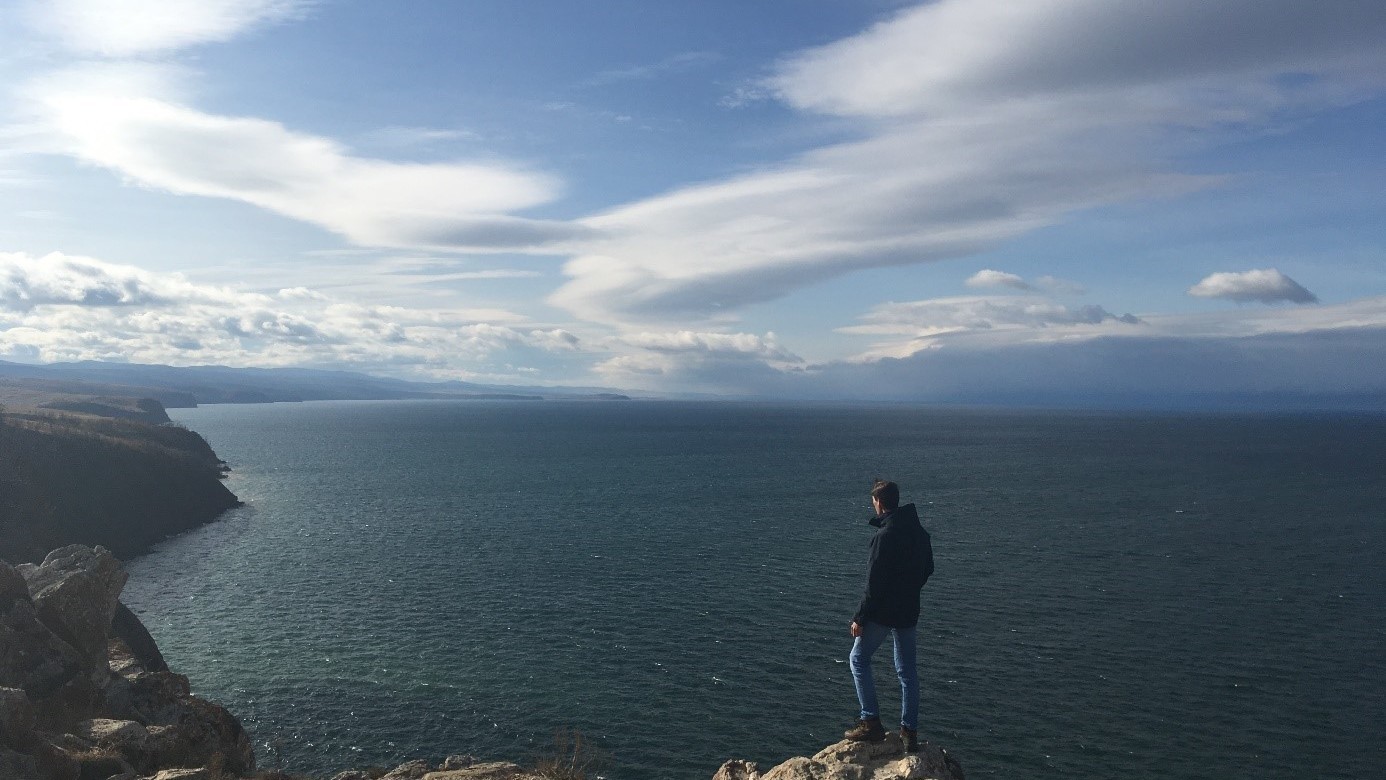 From Russia with Love

“Russia? Oh, that’s cool. Are you sure, though?” This was the typical response I received when I told people about my intentions to spend half a year in Moscow, the mighty capital of the Russian Federation. I am Christiaan van den Berg, a 22 year-old fourth-year Bachelor Squared student. Some of you may know me as a former active member of FAECTOR, having been member of the Business Trip Committee last year and the Freshmen Committee before.

I was very sure indeed: few things intrigued me as much as this mysterious country and its cryptic language. This interest had been reignited by the recent political developments. And what better way to truly get to know such a fascinating country and its people than by living there for a while?

And so I went. Only a mere three-hour flight away from Amsterdam, Москва is actually closer to home than many (including myself back then) may have thought. Visitors expecting a grey, old-fashioned city may well end up disappointed as they will find themselves in one of Europe’s largest and most modern metropolises boasting shiny skyscrapers, huge parks, fancy clubs, fast internet access and western brands including one of the world’s highest concentrations of McDonalds. That being said, remnants of the Soviet past can be found in nearly any street, which adds an interesting dimension to the cityscape. In my opinion, few cities are as vibrant and culturally diverse as Moscow. 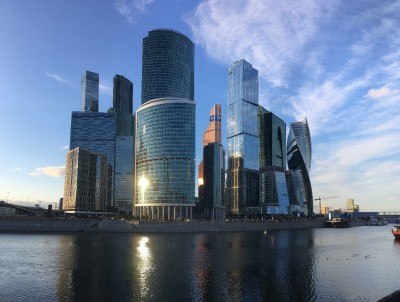 Moscow the way you (probably) would not have imagined it: Moscow City, the modern business district of Russia’s capital, boasts some of Europe’s tallest skyscrapers.

I studied at the National Research University – Higher School of Economics. Founded only in 1992, just after the collapse of the former USSR with the intention of providing western-based Economics education in Russia, this is a young yet one of the leading universities in the country, particularly renowned for its programmes in Economics and Business. It offers a wide variety of courses in English and is very internationally oriented, which is also reflected by its diverse student population and reputation of tolerance.

Besides an intensive Russian language course, I took four courses in the field of Econometrics and Economics, which turned out to be slightly more challenging than I expected based on the stories of experienced “exchange-goers”. Luckily, most of these courses were very interesting, albeit slightly different compared to those offered at ESE. For example: one course in Choice & Decision Theory, in which the class consisted of just five students, was taught by a very renowned professor, who had personal connections with various Nobel prize winners. Another quite shocking difference was the lack of presentation skills among Russian students (and sometimes even teachers!), who love to read out loud the presentation from a laptop while sitting behind a desk… Fortunately, I always managed to complete my coursework during the week, leaving (long) weekends to explore Moscow and the rest of this huge country. 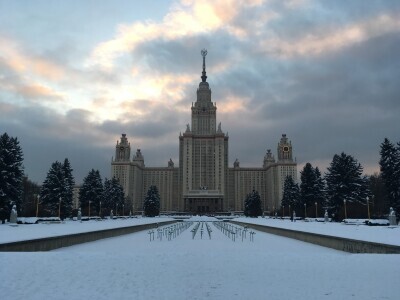 Moscow State University, ESE’s other partner university in Moscow, has its home in one of Stalin’s “Seven Sisters”: enormous buildings that were erected to give Moscow the allure of a world city. 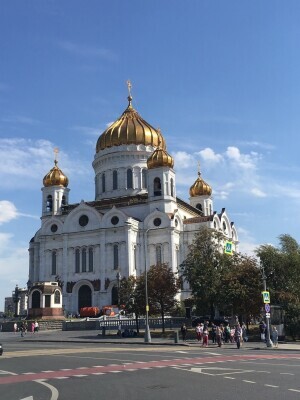 Russian Orthodox churches, like the Cathedral of Christ the Saviour in Moscow, can be found in any Russian city.

I spent much of my leisure time exploring interesting churches and museums or attending the world-famous Bolshoi Theatre ballet for just €1.30, but also appreciating the summer/autumn sun (yes, we had 25°C until the end of October) in one of the many parks or strolling through the historic streets in the city centre to soak up the atmosphere. Festivals and celebrations during holidays (of which there are many in Russia) formed another attraction. One thing is for sure: one can never be bored in Moscow. 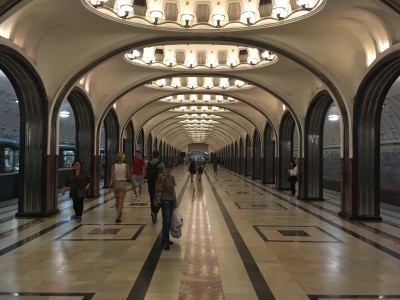 Extremely busy peak hours can turn a ride with the Moscow metro into hell, but the beautiful stations (and the low price, of course) compensate a lot.

“Moscow may be the capital of Russia, but it’s not actually Russian.” Following this typically Russian wisdom, it is almost a crime not to leave the city’s premises during your exchange. In Russia, the train is the way to go, so I spent quite some days and nights dreaming away while observing the everchanging landscapes from the window of a cosy yet way too warm train car. These trips totally changed my impression of Russia compared to the one I got when I first arrived in Moscow. They made me truly appreciate the immense size and variety in nature and culture that this country has to offer. From beautifully decorated Russian Orthodox churches in the historic Golden Ring cities around Moscow to the majestic Saint Petersburg, and from Europe’s largest mosque in the Islamic city of Kazan to endless snow and ice above the Arctic circle near Murmansk: every journey showed me a new side of Russia. My personal highlight was a 5000 km, one-week Trans-Siberian journey from Moscow to the desolate Olkhon Island in Lake Baikal, the world’s deepest and largest freshwater lake. However, besides revealing Russia’s cultural and natural beauty, these trips also served as a painful reminder of the vast prosperity chasm between Moscow and the rest of Russia. Despite my efforts to see as much of Moscow and Russia as possible, there is still so much left to be discovered on one of my hopefully many future trips to this country.

One thing that I definitely will not forget is the kindness and curiosity of the Russian people. They are very welcoming, helpful and keen to exchange views with foreigners, especially if the mutual language barrier has been overcome by you trying out some basic Russian sentences and them showing that they actually speak English to larger extent than they would be willing to admit. This has resulted in many inspiring encounters and conversations. 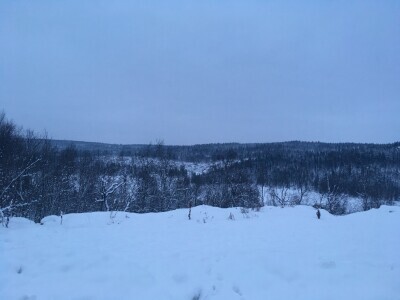 Sure, an exchange semester in a country like Russia can be a bumpy road. At some point, dormitory life without privacy, never-ending paperwork and bureaucracy, overcrowded metro stations, and grey, snowy winter days with temperature swings from -18°C outside to +26°C inside the state-heated buildings will start driving you crazy. Sometimes, you just want to take a break and retreat to comfort. But these are also the moments from which I have learned a lot.

Most importantly, my time in Russia has shown me that there are always multiple versions of the same story. It was interesting to experience how Russians perceive current events such as the MH17-crash, the situation regarding Crimea, the Skripal case and the arrests at the OPCW in The Hague. Perhaps surprisingly, we often found ourselves in agreement rather than disagreement. It has also given me a more critical view of Dutch media and politics.

These experiences, however, certainly have not made me regret my decision to spend a semester in Moscow. Rather, they have enriched my exchange and turned me into a more aware and critical person. I am very grateful for this opportunity and warmly recommend it to everyone

If you have any questions regarding Moscow, Russia or exchange in general, feel free to reach out to me 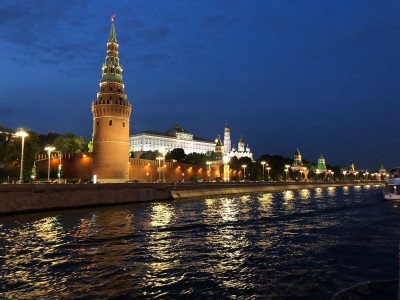