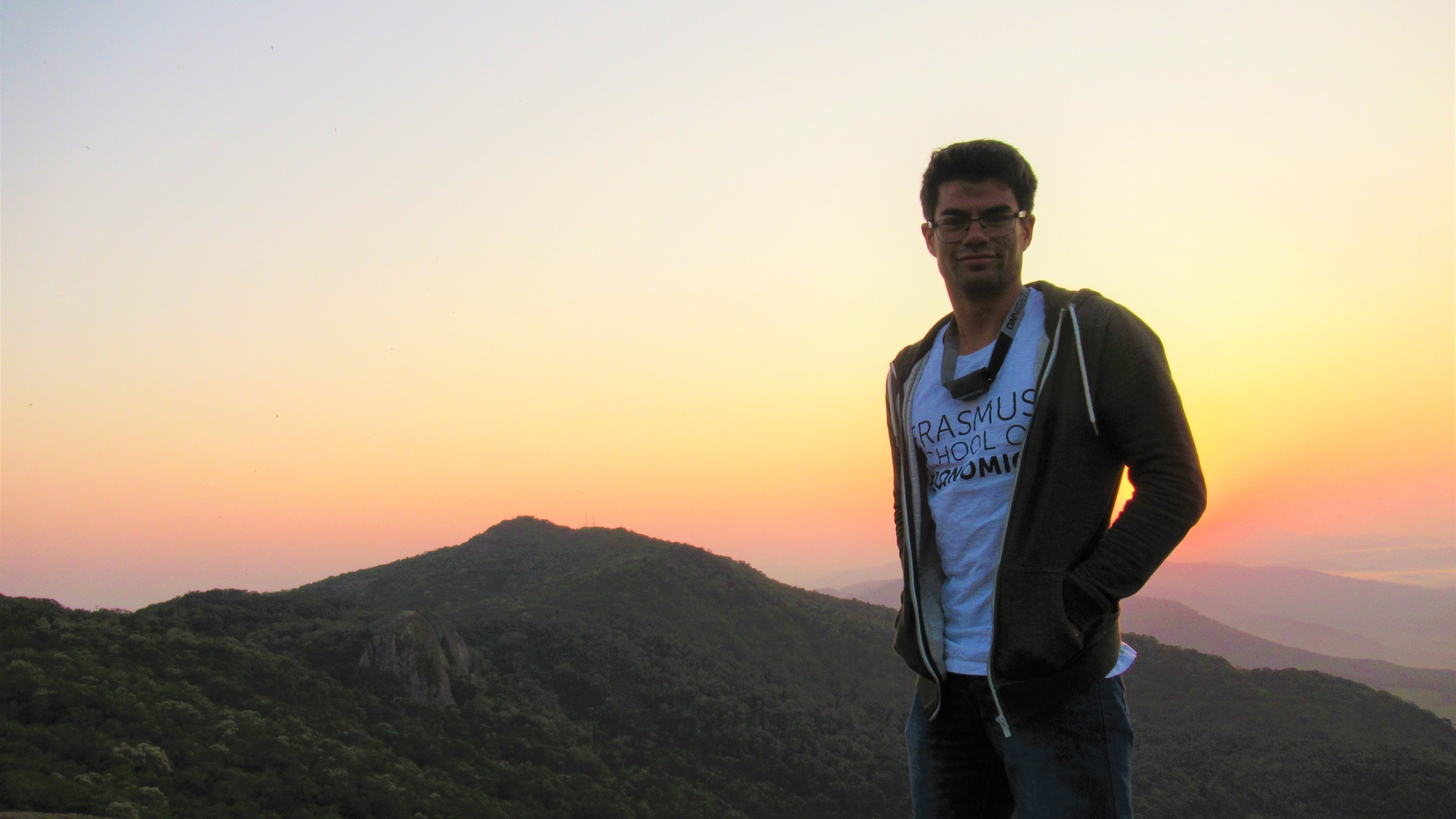 Brazil…one of the most dangerous countries they said. Well, I am still well and writing to you from the biggest city in the Americas. Of course, I am talking about São Paulo, with its population reaching over 20 million. Who am I? My name is Stephen Tseng and I am currently in my fourth year of the econometrics bachelor. I’ve been living in São Paulo for about three months now and I am loving it. So… should you visit Brazil? Definitely yes and I’ll tell you why. 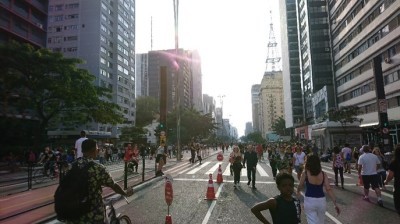 Avenida Paulista in São Paulo
Before arriving
My reason for going to Brazil was mainly to explore the Latin way of life and to learn the language. As a large part of my family is from Chile and I’ve always felt a bit distanced from it, I wanted to reconnect with my roots, so to Latin America we go. On my way to my exchange destination I made a ‘short’ detour. Once I left the Netherlands at the start of July, I still had to finish my thesis. Luckily, I was visiting my family in the States first, so in the end it all worked out well. After my visit I headed to my next destination… Mexico. At first, I was a little nervous, as it was my first time travelling completely solo and people saying it is a dangerous place doesn’t necessarily help ha-ha. However, I’ve noticed it isn’t as dangerous as people make it out to be, but of course there are things you must keep in mind. Also, I loved the experience of travelling alone and would recommend trying it out once, as it is a great way of meeting new people and discovering a country freely. After finishing my trip, I finally headed for São Paulo. It was not a quick flight, as I had two layovers, it took me about a whole day to reach my destination. One of them was in Manaus, which I later found out is the place to be for going on trips in the Amazon.
Arriving in Brazil
So, I arrived at Guarulhos International Airport, which is actually located in the city next to São Paulo. Once you head for the city you will notice immediately that it takes some time to get around as traffic is crazy and it is a huge city. For that reason, the rich travel by helicopter instead, sadly this isn’t an option for us students…Hence, I take the bus or metro. For the first two weeks I had booked a hostel in Vila Madalena, which is a popular neighborhood as it is safe and has a lot of nice bars and restaurants. I planned to find an accommodation once I arrived in Brazil and this only took me a bit over a week, so now I am living in Pinheiros, the neighborhood next to Vila Madalena. Before the start of university I had already met some of the exchange students as we had a WhatsApp group which was created by the international club, which is part of the economic faculty (FEA) of USP (Universidade de São Paulo). They also organize events where you get to know everyone, so it was easy to make new friends. 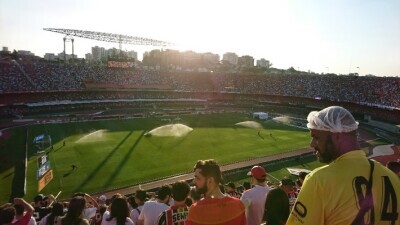 Celebrating my birthday by watching a football match in Morumbi Stadium 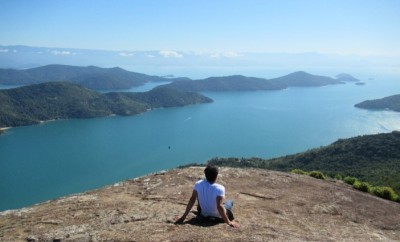 Saco do Mamangua: The first trip I took out of the city and the first hike…amazing
Life at uni
What is uni-life like in Brazil? Well, it’s as crazy as you could imagine. On campus there are parties every week and every day in the afternoon there's always some drum music playing at one of the main squares. The campus is huge and as a lot of people here say, it is indeed like a small city. However, as with the city you will quickly adjust to the large size. You don’t notice it as much in daily life, but once you see the city from above, your mind will be blown away.
So, about my courses, as I didn’t need the credits, I chose for the minimal number of courses possible so that I would have more time for other things. Hence, I didn’t need to be on campus a lot, but as you can get a full meal for only 2 reais (less than 50 euro cents) on campus, I still ended up being at uni a lot. Besides classes I also practice some sports at the sports facility on campus (which is free) and take some dance lessons at one of the other faculties, like Forro, Sertanejo and Zouk. The university offers some courses in English, so there is no need to worry about not knowing Portuguese. However, as not a lot of people speak English in Brazil, I do definitely recommend learning some before you visit, as it helps out a lot. 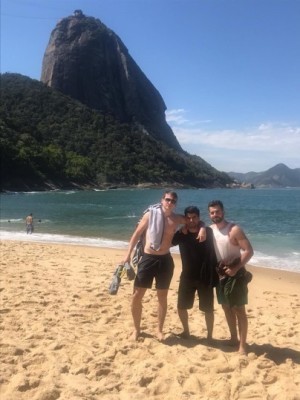 Praia vermelha: the first beach we visited in Rio
The city
Next to the life at university, there is a lot to do around the city. Museums, restaurants, bars, parks, you name it. For me one of the most iconic places in the city would be Avenida Paulista, which closes its streets for cars every Sunday, so there is live music, food stands, markets and people dancing on the street. Regarding nightlife, there is a lot going on in Vila Madalena, Pinheiros and Augusta from bars to clubs. I have never been to crazier parties than here in Brazil, it is a unique experience. Most clubs play funk music which I hadn’t heard before coming here but it’s great, listen to it. Concerning drinks, Brazil has their own strong liquor named cachaca which is present in Brazil’s unique cocktail: Caipirinhas, the most dangerous thing you will encounter in the country (take with caution). 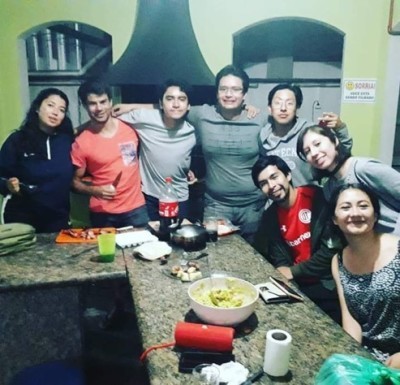 Doing a churrasco with a bunch of friends late at night
Things to keep in mind
Before I tell you more about the great things that Brazil has to offer, there are some things you should keep in mind during your stay. Firstly, you can’t go everywhere. There are some places best avoided, however there is no need to go to these places in the first place so it should not be a problem. Furthermore, the time is also crucial. As it gets later at night it is best to avoid walking far distances or walking alone. This also depends where of course. Places where a lot of people are present are usually safer to be, however pickpocketing will be more likely in this case. Luckily, there is this thing called Uber and it is dirt cheap compared to Europe, so download it if you consider visiting. The last thing to take in mind is that it is better not to wear expensive things and to not walk with your phone in your hand on the streets. However, do not worry too much. From my experience, considering the size of São Paulo, it is relatively safe. However, Rio is crazy… but definitely go there, it’s great. The problem with Rio is that the favelas (slums) are scattered throughout the city whereas with São Paulo they are located in the outskirts of the city. 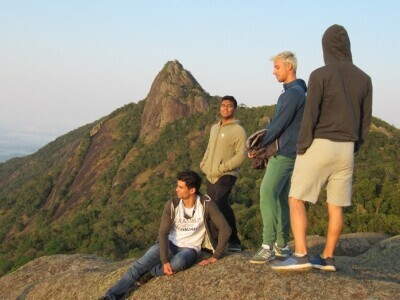 Extrema - MG: seeing both sunset and sunrise while sleeping on a mountain
Food
Where to start? There is a lot of different food you could get in the city. From Latin food to Asian food and of course the typical Brazilian cuisine. So, what would be considered typical food here? Well there are snacks like pão de queijo, coxinha and pastel and you have sweets like brigadeiros and bolos (cakes), which are simply amazing. Then you have simple platters which consist of salad with rice, beans and meat or fish. What you should definitely try if you’re visiting is a churrasco (BBQ), you can either do it at a restaurant where you can do a rodizio (all you can eat) or just buy some meat and invite some friends. The meat here is simply amazing compared to what I’m used to in the Netherlands. Not a meat eater? Don’t worry! As it is a big city, there is something for everyone. Oh, and I almost forgot there is this fruit called açai, of which they make ice cream and eat it with granola and other fruits, which is amazing to have on a hot day (which there are a lot). 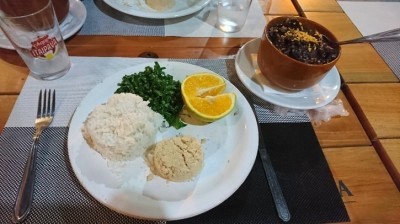 Feijoada: a typical dish in Brazil, stew of beef and sausage in black beans.
Other places to visit
Of course, there is a lot more to see in Brazil and São Paulo is a great destination to move from as there are a lot of outgoing buses and flights to any destination you desire. As there are no beaches in São Paulo, you will have to take a bus to visit the beaches. The most popular one to go to would be Santos or if you go a bit further you can visit Ubatuba or Ilha Bela. You should visit Rio de Janeiro for sure and can combine it with some more remote locations in the state of Rio like Paraty or Ilha Grande. Do a road trip through the state of Minas Gerais (yes, I drove on these crazy roads).

Lopes Mendes – Ilha Grande: one of the prettiest beaches I’ve seen
Then there is the north east with its great beaches, friendly locals and great seafood. You could go to Manaus and take a trip through the Amazon or if you’d like to see more wild animals check out the Pantanal. For the ones that would like to set a foot in paradise, check out Iguazu, Bonito or Fernando de Noronha (google it, you’ll be amazed). There is simply too much to see so I will have to come back some other time to explore the rest. 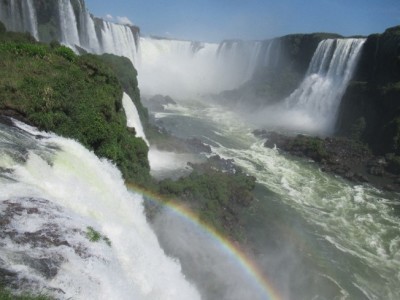 Cataratas do Iguaçu
If you are convinced by now to travel to Brazil, don’t hesitate to hit me up, I am glad to help (could start a travel agency by now). Most of my travelling is done on the weekends, however I am preparing to leave on a longer trip, namely to Colombia to dance some salsa and practice my Spanish...
Até mais galera.