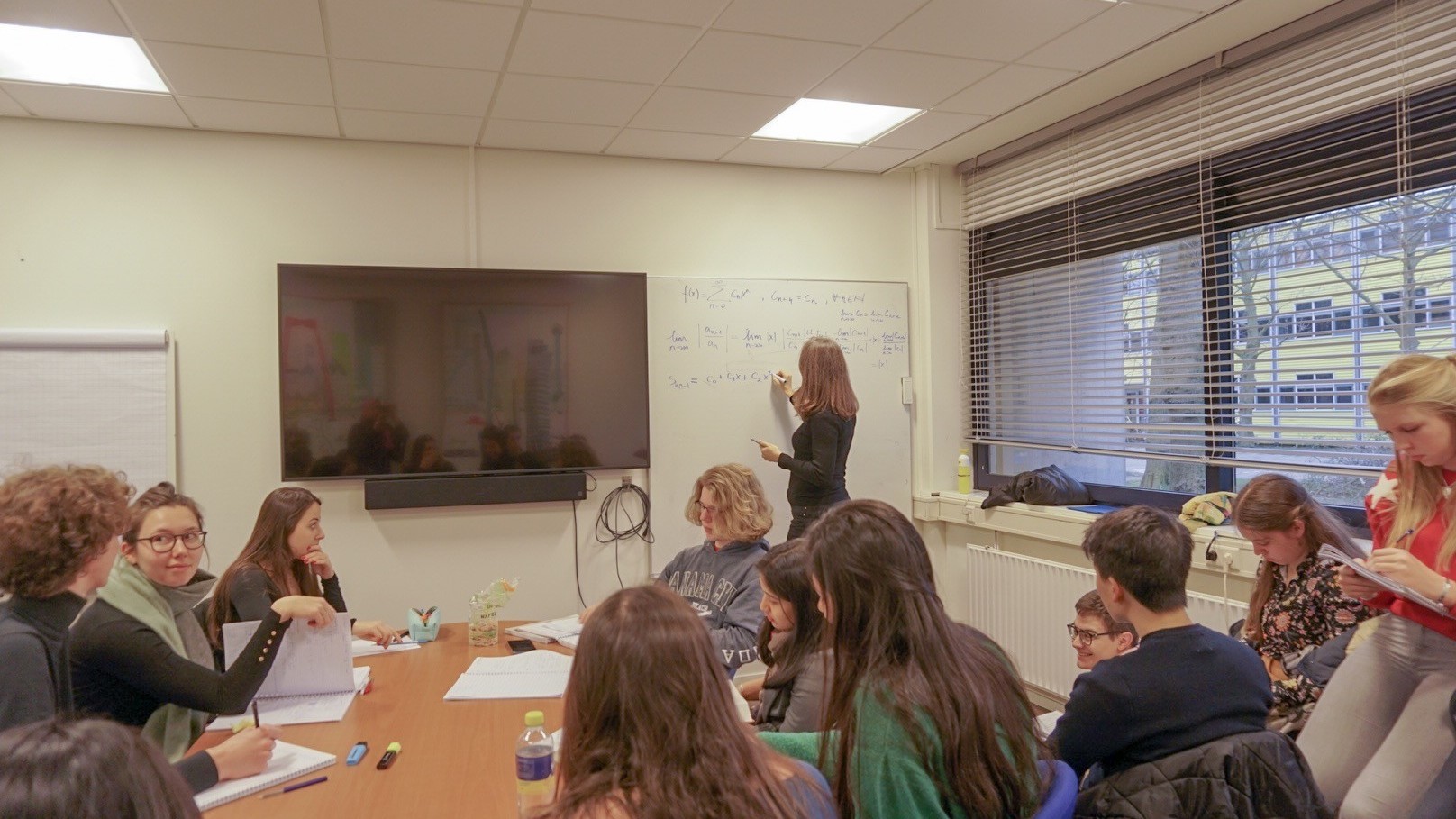 In this edition of Teacher Talk, we decided to have an updated chat with Dr. Emo Oldenkamp. She currently teaches Introduction to Analysis and Analysis for first-year econometrics students. On top of that, we also asked some first-year students on how they are adjusting with changes to studying in university.

How do you find the student atmosphere this year and do you think it is different from previous years?

I always like it, last year as well as this year. This year, I do feel some more trust from the students compared to last year. It is a really nice atmosphere, and they do work very hard. This year, to my biggest surprise, there were loads of students coming to the office hours immediately from the first office hour! Last year for the first three weeks, I was sitting alone in the room waiting for students and no one showed up.

So it’s like you have more motivated students who are eager to ask questions?

Yes exactly and that’s what I like about teaching. Having that contact and talking to students face-to-face is really nice.

For some students, university is such a new and frightening experience. Though they are eager to learn, some are very shy to ask questions in such a big lecture hall. However, many believed that it is more interactive than they have assumed to be.

Last year you taught both Introduction to Analysis and Analysis. Was that the first time you taught two blocks in a year with the same group of students?

You have taught at two different time periods in the school year and thus have seen the same students again. Did you see any improvements in the students, and how did you see them grow as mathematicians from the first to the third block?

We really appreciate it that you’re one of the few professors who tries to remember the names of the students!

That’s very nice to hear, because I really try to do my best to remember the names and it’s frustrating when sometimes I forget. I also appreciate the students for not getting fed up when I ask their name for the fifth time.

Do you notice any trends among students when they first enter university?

It’s kind of difficult to tell in the international group because there are students from many different countries, so it’s hard to generalize.

In the Dutch high school mathematics programme, geometry has been taken out. This was the last abstract material in the programme. As a result, it’s visible that abstract thinking is slowly deteriorating. It’s very difficult, because abstract thinking is necessary for econometrics, so it becomes more difficult for students to get used to it.

I grew up in the old Eastern European system. I started with simple set theory when I was 10 years old. So I learned about concepts like union and intersection very young and that’s already a step to abstraction.

Do you see any similarities or differences between how you were as a student compared to students now?

The main difference is that here it’s becoming more high school-like each year. For example, the block system really makes sure students start preparing in time for exams and having homework, among others. It’s like not trusting the students to take their own responsibility. Back in my day, we were basically left alone. We had semesters, so we had exams twice a year. This meant that we had our own responsibility to study, but that said we also had more freedom in our schedule.

If you had to change the curriculum to insert more trust in the students, would you do so?

I think I would introduce at least trimesters. It’s not only because this creates more room for the students, but also because for instance, 7 weeks are not enough to develop abstract thinking in mathematics.

The students believed that the exercises are very helpful in helping them understand the concepts. However, with the block system, some students find it overwhelming in the beginning as you have to work constantly, and it seems like taking a break is deemed “impossible.” Otherwise, you will fall behind. However, some motivated students enjoy the block system because it really enforces you to keep learning and understand the concept as it builds up. Of course, it can be terrifying to be in a big lecture hall, some also appreciate the small-scale tutorials as it reminds them the environment back in their high school. All in all, most students agree that the block system, whether they like it or not, really challenges their time management skills.

Do you notice any similarities or differences between the international group and the Dutch group?

The international group is smaller, so it is cosier. But for the Dutch group, it is important that you approach them with the same attitude and especially with motivating students.

The international students enjoy the size of the group. Especially starting a new chapter in their life, education-wise but also cultural, emotional and personal, the transition can be difficult. But with other students who are also somewhat in the same boat and share the same sentiments, the friends here really help you get settled. While the first block may be difficult, many of the students interviewed are optimistic about the upcoming blocks as they have learned from their mistakes to help them improve their understanding in mathematics. On top of that, they are excited for more FAECTOR events and events happening in Rotterdam (such as Eurovision) this upcoming year.

Since you are also teaching the same group of students in Analysis this year, do you have any last minute remarks/ messages you wish to convey on how they can grow as a learner or mathematician?

I talk to some students personally and invited them that if they have the feeling they have invested a lot and still did not manage the exam as well as they hoped, let’s meet up and discuss about the problem. What I realize each time that although I tell them things I also said in class (of course, trying to personalize it), they really feel like “oh yes, I think I can finally learn it like this.” Somehow telling it in class is different from saying it face to face. I notice that every year. I don’t mind talking to them personally, but yes, it’s funny. Almost everyone now starts studying by doing exercises, similarly to the high school method. What they should do now, is take the syllabus, slides, try to reproduce them, but not only reproduce them but then compare it really critically. Did I write it exactly the same? Do I miss some characters? Is it really important to understand why a step is needed or not. This is what is missing. Mathematics is all about patterns, you need to be able to reproduce. Everyone learns by reproducing first. I had to learn these theorems myself when I was a student. Of course, in the beginning, mathematicians had to come up with theorems and proofs by themselves. Now we have the advantage of learning the old theorems and creating new ones. These patterns then stay in your head, so when you see something new, you suddenly think “oh maybe I can use that technique.” We need to learn to be critical. It is also helpful to discuss your proofs with your peers. Very often if you try to explain what you do not understand, you will try to formulate it so precisely that you suddenly might just understand it before the other had a chance to give you an answer/explanation. It’s very important to talk about it. That’s also why the office hours are offered. Many students will ask “I do not understand this exercise”. I would then “force” them to explain exactly what step they did not understand, so when they can pinpoint it, they already made a large step in understanding it by themselves. But you should always be careful that you also keep in touch with the material. I often see people making summaries. If you don’t know the subject yet and you make a summary, you might be missing out important details. Then, if you look back at it, you will never notice that you are missing something. If you only have a book and no slides, I understand why you are making a summary because the book is too much. But slides or the syllabus are already a summary.

Do you have any last minute remarks?

I hear very often people going to courses offered by commercial purposes. They are offered by (former) students using partly our (the lecturer’s) material without permission. Secondly, there’s no control over whether their explanation to the students is correct, so the probability that they say something wrong is very high. Students also pay for it, while I am here every Friday afternoon to answer questions. I looked at the summaries for this year, and there were many things in the material they added to mine that were incorrect. Very often, the best students will become a TA here at the university. Although our TA’s are also just students, we instruct them ourselves, we help them constantly, and try to minimize any possible errors.

Do you have any advice for Future TA?

It’s important to think about your gestures because that can help you. It is important to remind yourself to approach the students instead of staying fixed next to the whiteboard. Stepping closer to them is also a gesture conveying “I am here for you”. Try to approach them, try to learn their names.

Thank you very much for having us Professor Oldenkamp! Make sure you keep reading the estimator to see which other professors Estimator will interview next!