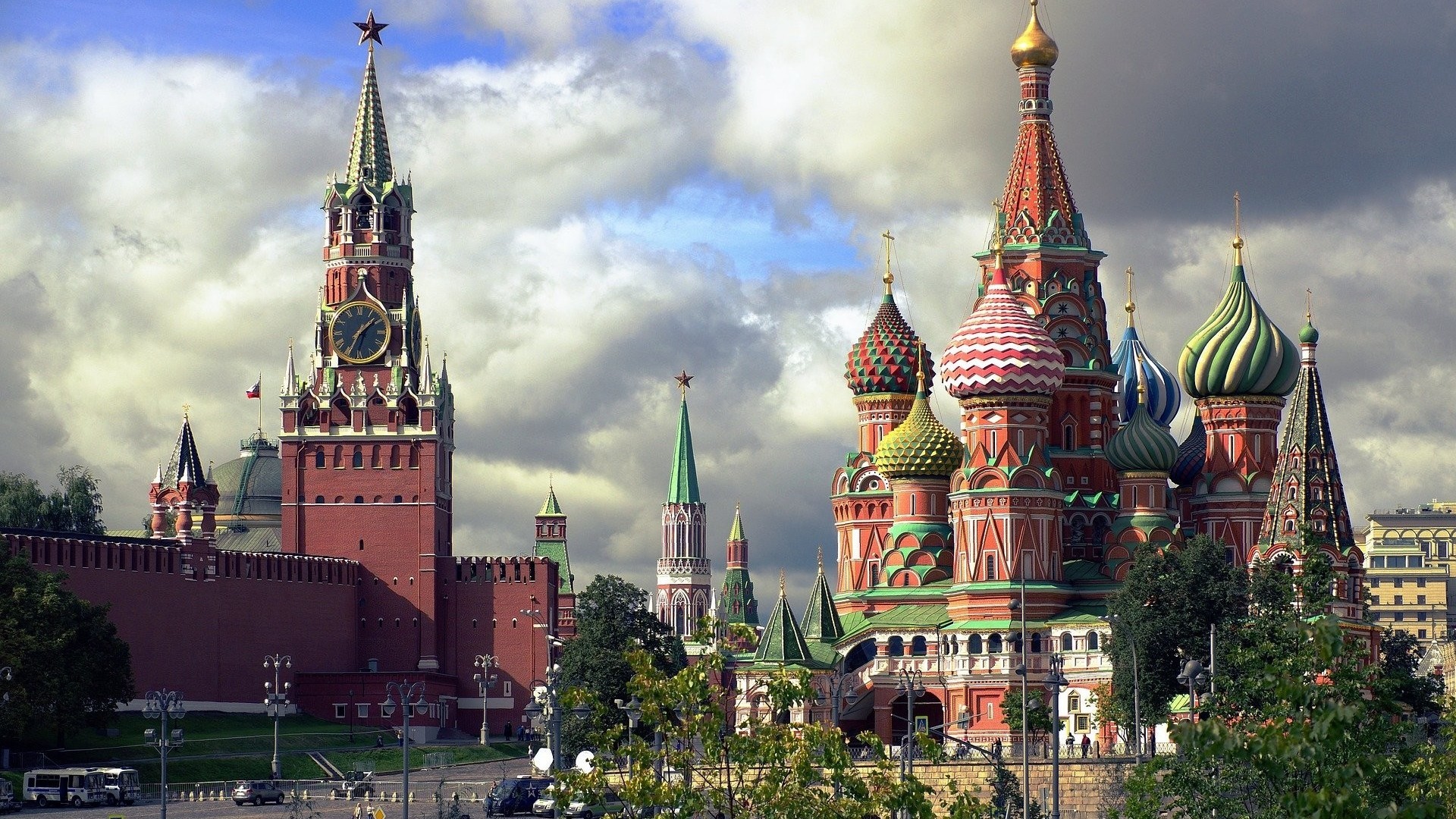 Happy countries are all alike; every unhappy country is unhappy in its own way. While the Dutch court granted citizens’ request of reviewing the curfew's legitimacy, Russians are not even allowed to criticise the government. Recently Alexei Navalny, the prominent opposition leader, was poisoned with the infamous Novichok nerve agent and was hospitalised in a severe condition. After going through a lengthy rehabilitation process, he returned to his motherland, where he was arrested and is likely to face the next two years of his life in prison. Why was he arrested? Was he not the one who got poisoned? There is only one reply: Welcome to Russia!

Please note that the visions in our articles are those of the writer, and not necessarily the views of FAECTOR.

But how are the authorities so strong? Alexei is well-known for his videos that reveal corrupt officials and their real-estate both within and outside Russia. He made a documentary about the previous Russian President - Dmitry Medvedev - which was viewed by 42 million, including the Press Secretary of the Russian President. And still, the cherry on top was yet to come.

On the 19th of January, soon after he was detained in prison, Navalny's team uploaded a video about Russian President Vladimir Putin. This video turned viral immediately, and according to the census survey, almost 60% of the Russian population either watched or knew the content of the video. Besides, as can be seen from the picture, the video trended worldwide, standing 8th in the Dutch trends. 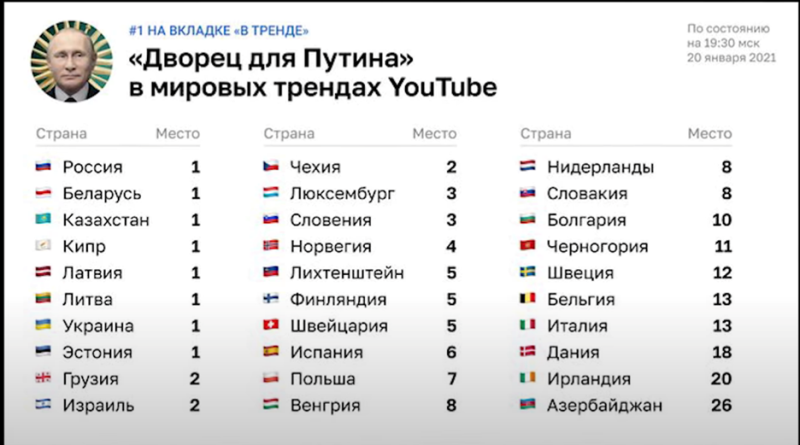 In the video, Navalny accuses Putin of having a large palace commonly known as "Putin's Palace" that he claims was constructed for President Putin, and details of a corruption scheme allegedly headed by Putin involving the construction of the palace. The estimated cost of the Palace is over $1.35 billion (approximately 1755000000 bitterballen). Whilst the corruption is an obvious tumour Russia bears, treatments are not that transparent, as its removal does not guarantee another one from emerging. Hence, keeping the current regime might not be the worst decision.

Being in power since the late 90s, Putin has been ruling Russia for almost 20 years. Quickly and victoriously ending the war in Chechnya, he has gradually amped up his powers, eventually attaining absolute power. Over the years, he has built a well-known ‘vertical authority’, a system where each government segment is supervised by another authority, where he is the one on the top. Corruption has sky-rocketed, and people are becoming poorer and poorer, with about 13.3% of the population, or 20 million people (whole Dutch population) living below the poverty line in 2020. The Russian economy has been stagnating since Crimea was annexed in 2014, as a result of which most industries have since been under sanctions. The situation reached its apogee in 2020, when changes in the constitution enabled Putin to renew his presidency practically indefinitely. Despite the mass protests and critical Covid-19 situation in Russia, the government decided that it was safe to conduct the voting. The single party system in Russia makes it almost impossible for the opposition to have a say in decision-making. Political opponents mysteriously tend to consume poison or commit suicide. The situation is better described by a famous song by the Beatles from 1968.

The primary age segment that supports the current leader is 60+. They worship Putin as the builder of present Russia and praise how life became much better under his ruling. This set of statements is not entirely false. Indeed, if we compare the times of the USSR and early 90s, we notice that Russia is now much safer and freer. In general, it is commonly accepted that it was mainly criminal mobs that ruled Russia in the 90s, and compared to the USSR, the freedom index has significantly improved: people can now travel abroad, and political opponents can exist. Another reason why the “Russian God” has such an unbreakable reputation among these people is their age and hence, reliance on TV as the main source of information. That is where the infamous Russian propaganda takes its turn; it is the place where people stop idolising Putin only in two cases:

Lastly, the common belief among Russians is “Who else if not him?”. In fact, the political system in Russia is built so that not many dissents can emerge/survive. The last time Putin was seriously challenged was in 2012. Protests were led by Garry Kasparov (13th World Chess Champion), Boris Nemtsov (Former Deputy Chairman of the Government of the Russian Federation), and Alexei Navalny (of whom we talk about later in the article). Eventually, Kasparov was exiled, Nemtsov was killed, and Navalny…

Afterward, no serious opposition was ever created. 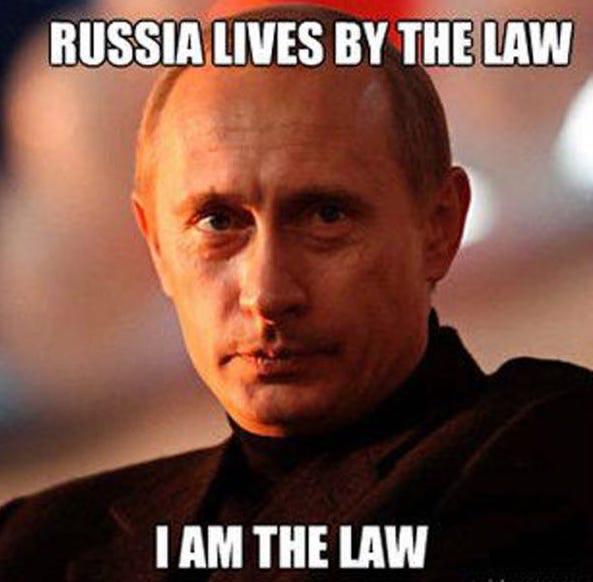 While mentioning corruption and long-lasting presidential term would be valid arguments, we need to delve into less commonly known controversies. First and foremost is his massive mania to restore the majority of attributes that once belonged to the Russian Empire. This is not only characterised by territorial pretensions to its neighbors but also by a restoration of typical pre-communism characteristics such as the importance of church in daily life. His annexation of Crimea has widely ruined relationships between people in Russia and Ukraine, people that once couldn’t be separated. Second are his questionable reforms and decisions. While the reasons for constitution renewal were obvious, it was unclear why he would shoot himself in the leg and increase the pension age (his target audience). Another reason is his surrounding. All the people around him are either his friends or family. Arkadiy Rotenberg (Judo sparring partner of Putin) is the owner of the largest Russian construction company and Alexey Miller, who was Putin’s secretary in the Saint Petersburg Mayor's Office, manages the well-known Gazprom (supplies Netherlands with gas). Furthermore Chelsea F.C., the beloved club of millions of people, is controlled by Putin’s business partner from late 90s, Roman Abramovich. These kind of ties and human resource management makes it extremely easy to control the elite. Last but not least is the steadily declining standard of living in Russia. Sanctions, increased unemployment rate, and high migration/brain-drain are some of the problems that Russia is facing. Nonetheless, propaganda advises people to stay strong, and wait till Putin reposes all the capitalists, showing them the real power of Russia. Only then, society will start to flourish.

Navalny, a Yale University graduate, has a clear vision towards the westernisation of Russia. His views on corruption are straightforward and resemble that of another opponent of Putin, Mikheil Saakashvili, former Georgian President and a graduate of Columbia University, who exterminated corruption in Georgia in under three months, once the biggest corruption nest in the USSR. Navalny thinks that only by imprisoning the current regime actors and returning everything they stole from the nation (oil, gas, uranium) back, Russia can move towards democracy. Nonetheless, he disagrees with western countries on the methods of treating the current regime. He claims that sanctions imposed since 2014 harm ordinary people more than those who stand for these crimes, as the increased price of commodities made civilians switch to low-quality alternatives. Instead, Navalny proposed to do targeted sanctions. In his list, Alexei listed all the people in Putin’s network and offered to freeze their foreign assets as a way of punishment.

Despite being hailed for his modernist views on development, Navalny’s close ties with foreign countries, however, raise many questions towards his figure. Russian authorities assert that he is tightly linked to foreign intelligence, whose only goal is destroying Russia (stereotype from Cold War). Notably, they highlight Germany and the USA. As a matter of fact, they point out that Navalny selected nowhere else but Germany to recover after poisoning. Moreover, Bellingcat, the British collective of researchers, investigators, and citizen journalists, has provided Alexei invaluable secret information on the identity of those behind his poisoning. This gives the current regime more ground to accuse Navalny of being a foreign agent.

Another segment that our candidate has to convince is ordinary people. In his presidential campaign in 2018 (in which he was eventually not allowed to run), people realised that his statements lacked any concrete action plan. He mainly concentrated his speech on how corrupted the current regime is and how they should all be punished; however, no focused anti-corruption scheme or systematic tax system was offered. The numbers provided were vague (setting minimal salary to 285 euro, or 309 bitterballen) and were not based on any research. Appalling mistakes, however, happened when he started talking about factually incorrect data. One example of that might be that 88% of national wealth is controlled by 0.1% of the population. The real values are much lower, constituting about 62%.

Recapitulating our findings, we can observe that the ground reality is fairly complicated. Similar to Putin, Navalny also has his share of people who dislike his candidacy. Likewise, both parties have a large share of supporters. While we can infer that Putin’s time on the throne is approaching its (ill)logical ending, we are not confident that a suitable candidate has appeared on the scene yet. Currently, Russia has two scenarios to choose from:

Ultimately, either way will happen. For one to survive, another should die. The culmination is near! Watch in all cinemas, soon!