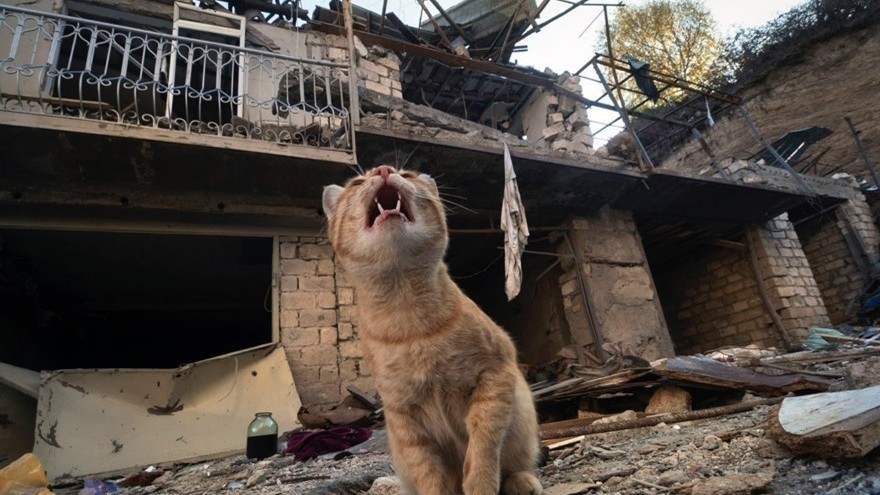 War has regrettably been a recurring aspect of human history since the beginning of time. As we commemorate WWII in the Netherlands, it is important to acknowledge and be aware of the numerous conflicts around the world which are still ongoing today. One such conflict is the Nagorno-Karabakh War fought between Azerbaijan and Armenia. As someone who has lost family members to this conflict, I want to highlight its relevance and yet try to present both sides objectively.

Please note that our articles sometimes state views that are those of the writers, and not necessarily those of FAECTOR.

This chilly September day in the middle of the pandemic had everyone in shock. The echoes of shells, bombs and artillery violently disrupted the silence of the mountains. War had made yet another dramatic entrance in this part of the world. While Azerbaijan sensed an opportunity to reclaim lost lands, Armenia was horrified by the possible territorial consequences of the war. Forty-four days later, only officially, 5000 soldiers were buried…This was the 2020 Nagorno-Karabakh War fought in the eponymous region disputed by Caucasian neighbours Azerbaijan and Armenia.

Where is Nagorno-Karabakh and why is it relevant?

The highly diverse Eurasian region of the Caucasus, nestled in between Georgia, Azerbaijan, Armenia and southern Russia, is no stranger to war. Bearing witness to six wars in the last three decades including the First Karabakh War of the early 90s, the 2020 Nagorno-Karabakh War is another unfortunate addition. Slightly larger than the Dutch Randstad region, Nagorno-Karabakh, whose name translates as Mountainous Black Garden, is an autonomous region delicately positioned between Armenia and Azerbaijan and bears immense cultural value to both states. The territory was an autonomous region inside Azerbaijan SSR (Soviet Socialist Republic, a state within the USSR) populated by both ethnic Azerbaijanis and Armenians. Territorial claims over Nagorno-Karabakh were first ignited during the delicate period of the fall of the USSR when the region faced a power vacuum. Armenian SSR, whilst fighting for independence from the USSR, wanted to integrate Nagorno-Karabakh as a sovereign territory of its post-Soviet republic. This was challenged by the Azerbaijanis as both the Azerbaijani and Armenian communities claim it as their historical land. That is when the Armenian uprisings began. Many Azerbaijanis realised that war is inevitable, and being afraid for their lives, left their homelands and migrated to the mainland. Hence, by the time war officially started in 1988, almost no Azerbaijanis were living there.

Soviet map of Armenia and Azerbaijan

The period between 1988 and 1994 saw a full-scale war now referred to as the First Karabakh War. Despite having a larger population, Azerbaijan was completely unprepared for this war. After the fall of the USSR, the newly formed Republic of Azerbaijan went through a turbulent period internally with three consecutive regime changes in a span of four years. Azerbaijan’s gradual divorce from Russian influence and its increasing closeness with Turkey during this time is widely believed to be the reason Russia allegedly started supplying Armenians with armors and troops. The lack of a strong centralised Azerbaijani leadership is one of the primary reasons the country lost most of its territory in Nagorno-Karabakh. Only after the establishment of a stable government by its 4th President Heydar Aliyev was a ceasefire agreed on. 30,000 casualties later, the war had finally stopped. Armenia captured not only Nagorno-Karabakh but also seven nearby cities, which became the “buffer zone” for future negotiations between the two countries after they revoked all relations out of hostility.

Many attempts to negotiate a resolution took place but none of the agreements satisfied all sides. The most recent ones, known as the Madrid Principles, were prepared jointly by France, the US, and Russia in 2009. According to these principles, Armenia was obliged to return five out of the seven regions it was occupying while the two remaining ones were to be returned after conflict resolution. In addition, all refugees (800.000 were left without their homes after the first war) were to return to their homeland. In return, Azerbaijan (and consequently Turkey) was to reopen all communications with Armenia and allow Karabakh to be autonomous until a legitimate referendum could be conducted. The previous referendum held in 1991 was not officially recognised by any state, as no Azerbaijanis of Nagorno-Karabakh attended the voting. However, Armenia rejected such an option as with its current demographic crisis of a declining population, its chances of winning the referendum were bleak, combined with the fact that the Azerbaijani population has almost doubled since the 90s. The Madrid principles were seriously worked on up until the Velvet Revolution in 2018, when there was a coup in Armenia. The new administration disagreed with the principles and was determined to make other countries recognise the self-proclaimed  Nagorno-Karabakh Republic. This breakaway state, occupied mostly by ethnic Armenians and supported by Armenia is located in territory which is internationally recognised as part of Azerbaijan. As such, there was an uproar in Azerbaijan which led to increasing support for the war.

The Second (and hopefully final) Nagorno-Karabakh War of 2020

On the 27th of September last year, war reared its ugly head in the already ravaged and scarred region. While it is unclear who started the war, it was generally believed that it would be no different than the clashes in 2016 or earlier in 2020, both of which only lasted 4 days and did not change the status quo. No one expected the war to escalate and continue for as long as it did. Shrouded by often unreliable and conflicting media reports, both sides were reluctant to acknowledge their losses. A ceasefire was agreed upon on two different occasions and tragicomically broken after two minutes. While the US remained largely absent from the conflict due to its elections, Russian President Vladimir Putin took on the mantle to traverse this territorial imbroglio. The Russian-brokered deal consists of Armenia relinquishing its control on the occupied cities and enabling a route for Azerbaijan to directly access its enclave Nakhchivan, in exchange for Azerbaijan to provide Armenia with a corridor to Nagorno-Karabakh. These roads will be monitored by Russian peacekeepers.

After 44 days of battles and bloodshed, both countries are mourning the death of their soldiers (more than 20,000 dead or injured), and cancelled New Year celebrations as a sign of respect to their martyrs. The war has dented yet another generation and its effects will be seen for many more years, though the mood is more definitive now than ever before. While Azerbaijan, which for a long time was the losing side, has been transformed to the winner and the ratings of the current administration are at an all-time high, Armenian citizens demand that the current regime step down. At the same time, these two countries which had a peaceful relationship in Soviet times, have gained an opportunity to rekindle it. Such progress will benefit Armenia, which has been in a blockade from two of its neighbors (Azerbaijan and its close ally Turkey), and will allow Azerbaijan to transport its oil to Europe via a much shorter route.

While these steps will benefit the countries economically, whether people will trust each other anytime soon remains to be seen. The level of animosity towards the other nation is unimaginably high in both countries, and it may take generations for these nations to become friendly neighbours again. Only then will the Caucasus flourish.