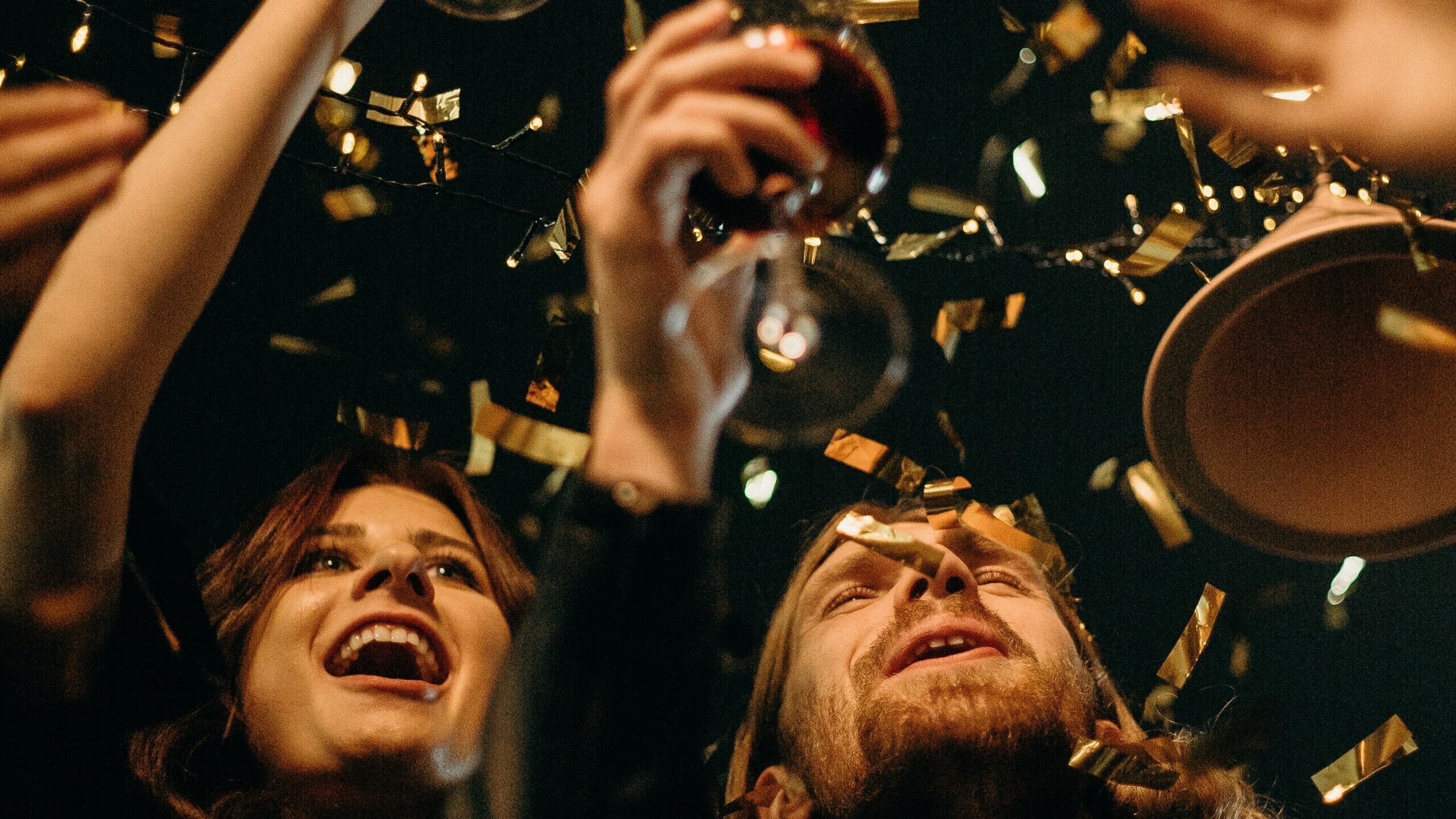 The holidays are finally here and as the Estimator committee is scattered across the world, we thought it would be nice to detail our plans and different holiday traditions.

After the last exam, the lack of sleep kicked in like the spindle of Sleeping Beauty.  And after a superpower nap I had - besides a disturbed sleeping rhythm - a lot of energy to do things I needed to do a long time ago. However, I converted all that energy into a lot of gezelligheid and forgot everything else. All social activities just absorb too much energy to be productive at the same time. Perhaps the most exhausting activity is Christmas dinner, especially when you have to do it twice (in the Netherlands they tend to double the amount of Christian holidays).

Christmas dinner with my family will be as awkward as always. I have nothing against any of my family members but there is always some distance between them and you. If I spend 364 days per day without them, I still don’t know what to talk about. I just follow the majority. Because nearly everyone has the same three step plan to minimize the awkwardness. First, just talk about basic topics like school, sport or news. While eating, you can have your thoughts on the food. And at the end of the evening, you just have to mention that it is so gezellig and plan for next Christmas.

However, one day before I wanted to go home, one of my roommates tested positive on Covid. I’ll stay in quarantine for at least a week, so I won’t be able to be at the Christmas dinners. So no awkwardness, no family games and no gezelligheid this year. As if someone from above wants me to be productive this holiday.

Holiday season this year started on the 22nd of December, right after finishing my last exam. After leaving M-Hall behind me and some friends went to the campus Spar to get lunch, and, for a lack of a better alternative, decided to stay in Polak to eat together. Even though it was nice to finally spend some time with friends without exams looming on us, finding ourselves in Polak right after exams was also a fresh reminder that this Christmas still wouldn’t be like the ones of old, before everything went to shit.

After parting ways with my friends I went home and started cleaning (after exam season, my room was not in the best of conditions) and packing for I had a plane to catch. When I arrived in Barcelona I was picked up by my dad at the airport and I was home after a brief drive. My excitement for being home was very quickly upstaged by the announcements of new Covid measures in Spain. I had been looking forward to clubbing with my friends here and to see my family, things which thanks to Omicron would not be possible anymore. I guess it serves me right, I had been making fun of my Dutch friends these last couple days because Spain had less restrictions and I would be able to party. Turns out karma might be real.

In Spain Christmas is a big deal, measured in the amount of family meals that one has in the span of 2 days. It is honestly overwhelming, but after a few months of self-cooked food I appreciate being stuffed like an animal getting ready for slaughter by my grandmothers. I am not the best cook. It starts on Christmas Eve, where we share some “tapas” and some shrimps “a la plancha”. The 24th is also the day in which one of the most unique Catalan tradition takes place (Catalonia is the north-east region of Spain where Barcelona is located). Catalan children believe the tale of the “Tió de Nadal” or the “Log of Christmas” which is a magical log that comes from the forest a couple weeks before Christmas Eve. It eats and drinks, stocking up its reserves because, eventually, on the 24th of December it will be “shitting” presents for everyone. The origin is hard to pinpoint but its roots are much older than Christmas itself. It is believed that the log’s purpose was to be burned during the solstice of winter as part of a ritual to honor the ancestors of the Catalan people of old. However, after some tweaks it is now a child favourite highlight of Christmas here.

Christmas day this year was another great moment for my taste buds. My grandma’s broth and stuffed calamari (both of which were served in excess) had me very well-prepared for the “siesta” that came after lunch. Later on the same day I had a Christmas dinner with my friends in which we sang our lungs out to many great Christmas songs or Spanish “villancicos'' while drinking “cava” and wine, which probably had a lot to do with me remembering it as a talent-show worthy performance.

Now I’m heading to the Pyrinees where I hope to be able to experience a bit of cold since this Christmas has been particularly warm in Spain, although I’m not complaining, I need to rest a bit from the cold of Rotterdam before going back in January. I will have plenty of time to freeze my toes then!

Holiday, holiday, holiday… something I have been dreaming of and making plans for it for a while now! Of course, as for everyone, catching up on a sleep schedule is the number one priority. Besides that, I am planning to spend all of my time catching up with my family and friends, since I have not seen them since August! Oh and how much did I miss playing with my dog in the snow!

As every year, there are some winter holiday traditions my friends and family follow. First of all, a Harry Potter movie marathon with my little sister is a must. Yes, I’ve seen it hundreds of times, and YES I’m going to watch it once more, and don’t even try to judge me for that! If you haven’t done this during Christmas time, do you even celebrate Christmas?!

Then, hopping in the car and doing a Christmas tree hunting/road trip with friends. Due to pretty high gas prices this year, the road trip may be somewhere a bit closer than usual, however, I am still extremely excited to explore different cities’ Christmas spirit!

Winters in Lithuania are usually pretty cold with heaps of snow, so going snow tubing and ice-skating on a frozen lake nearby is just something you can’t miss. Regardless that after spending an hour outside you can’t feel your toes or fingers, it still remains one of the best things to do during the Christmas holiday.

As a cherry on top, with friends, we are throwing an annual New Year party, which, hopefully, is going to be super lovely this year, since we couldn’t celebrate last year due to pandemic restrictions…

The feeling of the holiday started for me already on wednesday the 22nd , when I went back to my previous university city (Enschede), and joined a christmas dinner with some friends from there and saw how things have been evolving back there. On christmas day, we have the tradition that I make a christmas quiz on kahoot, which i have been doing for about 10 years now.  Thursday I will attend a marriage from a friend in Zaandam, where there will be a small reception after the church service.

And finally, on new years eve I will be with my student group (dispuut) and have a festivity with them.

My plans have primarily revolved around sleep. Three quarters of the day dedicated to it, to be precise. But really, block 2 was incredibly draining and the lack of sleep was just absurd. So this holiday has definitely been very lowkey and just spent cozying up on the couch with my dog and eating my mom’s home cooked Kurdish food. It's also been incredibly refreshing to catch up with highschool friends again after not having seen one another for six months. The Talented Mr. Ripley, the book I’ve been reading this holiday, also keeps me quite preoccupied. And since I don’t have any significant plans to talk about, I’ll share an interesting fact about Tom Ripley, the infamous anti-hero and main character of this psychological thriller. Interestingly, despite having killed so many (more than a dozen), Mr. Ripley still isn't considered a serial killer. That’s because he lacks a modus operandi - a particular manner or technique of committing these crimes. Tom eventually kills almost every victim in a different manner, this romanticized psychopath cannot really be considered a serial killer as mainy claim him to be. Anyways, I definitely think anyone who is into crime and psychological thrillers should read or watch the movie :)