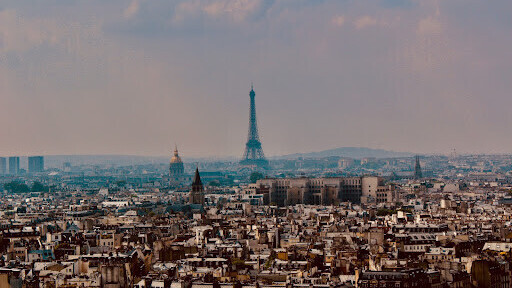 Paris, the city of love. The city of lights. A fashion capital of Europe. Paris does leave a vivid and lasting emotion to anyone that ever visits it, whether it’s disgust at the uncleanness that surrounds the capital, stress at the countless tourists promenading all year round, or awe at the beauty and art-filled galleries and palaces. One does not simply remain indifferent to Paris. With spring well under way and summer just around the corner, you might be already making your travel list for the months to come. The Mediterranean coast is the safe option for a pleasurable seaside escapade, Greece seems awfully popular in these parts of the world as well. And now that Macron has been re-elected, you might be contemplating visiting the much-admired French capital. Whether you have recently visited the city or plan on doing so, or simply want to learn more about the French culture and history, this article was meant for you.

Paris is full of infatuated lovers and honeymooners all year round. And you can easily understand why. During the day, one’s eyes are full of Victorian and Art Nouveau architecture, full of art (i.e., Louvre, Musée d’Orsay or the Paris Museum of Modern Art) and not to mention the wine. They even have le mur des je t’aime, a wall of love in Montmartre. Then, once the night shimmers in, the Eiffel tower will shine the way just like Virginia Woolf’s Lighthouse.

Similar to Florence during the Renaissance, Paris attracted some of the brightest minds in the world, and to go back to the lighthouse analogy, like the Eiffel tower is a lighthouse beaming the way for thousands of lovebirds at night, Paris was a lighthouse for some of the most illuminated minds of the free world, proverbially calling them home. Just think of the Lost Generation and the likes of Ernest Hemingway, Gertrude Stein, Ezra Pound and James Joyce. That’s not even to mention Marie Curie-Sklodovska, René Descartes, Gustave Eiffel, Blaise Pascal, Édith Piaf (La vie en rose anyone?), Claude Monet and Auguste Rodin, Victor Hugo and Antoine de Saint-Exupéry, Jacques Cartier and "Coco" Chanel, and my personal favourite Maximilien de Robespierre, a head figure of the French revolution and ironic embodiment of the saying “what comes around goes around”. If any of them are unfamiliar to you… I was just about to urge you to pick a book once in a while, but you know what, it might just be too late for you. Ignorance is bliss after all, is it not?

The city is undoubtedly gorgeous and has rightfully been the setting of many popular novels (i.e., Hemingway’s A Movable Feast, Hugo’s The Hunchback of Notre Dame) and movies (i.e., Audrey Hepburn’s Charade, Les Misérables, Amélie and my childhood favourite Ratatouille). While its factual beauty is not in discussion here, its appeal can surely be contested mainly due to the 30 million tourists per annum and the constant social media frenzy. Do you know the saying “love is in the air”? Numerous people find it appropriate to use said expression in proximity to the Seine, in particular when close to the Eiffel tower while taking enough pictures to constantly post on social media for a whole bloody year, reminding their so-called friends of their exquisite visit and deeply romance-filled life. Oh, grow a pair, will you? And that’s not to say that I do not understand the romantic appeal of Paris, I do (it’s me that wrote this piece, is it not?), but the current generations have overtly diluted its meaning and allure to the point of degrading them to mere popular clichés.

When I expressed my disdain towards the French capital to a Parisian, she was exasperated and shocked, to put it mildly. She must have imagined that I was mad or I had awful taste or both. Truth is, I have only experienced the city as a tourist, not as an inhabitant, immune to the frenetic merry-go-round that is the centre of Paris. Here are some of the sights she recommended I visit for the ultimate Parisian experience: Chemin de fer de Petite Ceinture, Panthéon Bouddhique, Galerie Vivienne, Promenade plantée, Rue Cremieux Paris and Hôtel-Dieu. So, try them out if you want a better view on Paris.

So, say that after reading this piece you decide to visit Paris after all (not in August, mind you), here are some useful tips and tricks you might want to know before embarking on your journey. Word of caution, not many French speak or are willing to speak English, so the “Oi waiter, fish and chips and a cold lager, cheers!” does not work the same kind of magic as it does across the Channel. And it’s not “gracias” or “grazie”, but “merci”. And good gracious, do try their cuisine, it’s… interesting to say the least. Also try a “traditional” breakfast at a café, double espresso and a pain au chocolat or a croissant should do the trick. For great cafés, try Café de Flore, Café des deux magots. And avoid chain restaurants at all costs, especially those with menus written in English or in multiple languages. But there’s really a wide array of delicious food available, for good Asian food go to rue de Belleville, for Middle Eastern cuisine, L’as du Falafel is where to go, and for pizza, look no further than Coinstot Vino, Louie Louie, or Tripletta.

This might come as a shock to you, but biking is not the norm in Paris, so try to pack at least a comfortable pair of shoes; chic is cool until your feet are hurting like hell in the middle of the Louvre, then you’ll wish you picked those plain-looking but comfortable Converse sneakers. Once you get there, try to avoid travelling by taxi and driving, the former has hyperinflated fares while the latter is horrendous. I heard that Parisians never put their cars in park such that the departing cars can make room by pushing the other parked cars back and forth, not sure if it’s true or hearsay, but you get the point. This might actually explain the popularity of Peugeot in France. Instead, use public transport when possible.

When you visit the Tuileries Garden, for you must see the garden, also consider taking an hour of your time for the Musée de l'Orangerie which hosts several works of Picasso, Chaim Soutine, Modigliani, Matisse, and, the pièce de résistance, eight giant panels of Monet’s Water Lilies. And some good news, all of Paris' museums are free on the first Sunday of the month. Will it be crowded? Yes. Will it save you money? Yes. Will you be able to visit all of them that Sunday? No way gonzalez. So, prioritise people! In other news, drinking in public spaces is legal and beware of thieves and scammers! I must go now, safe travels!