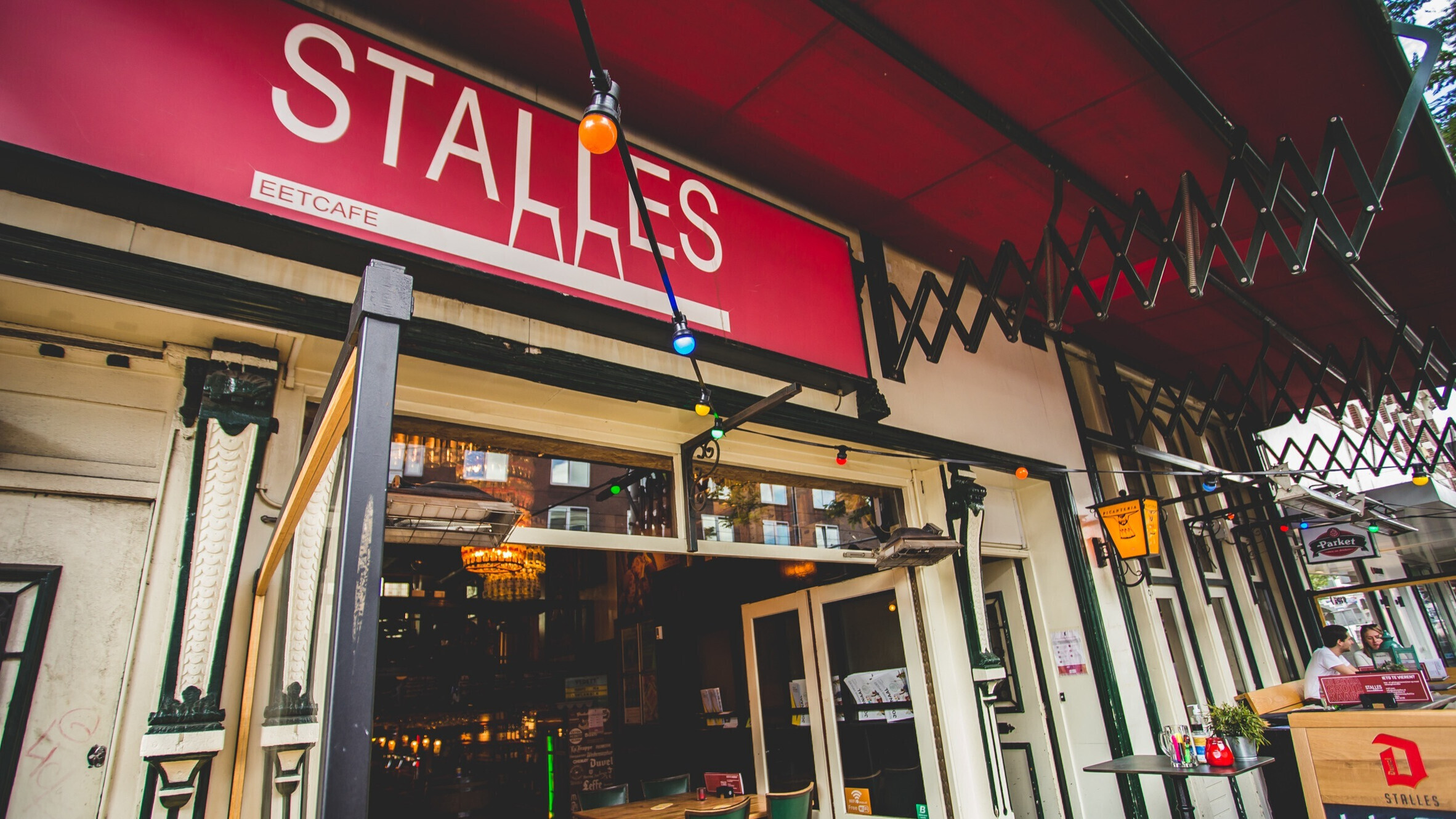 A couple of weeks ago, Estimator sent a skilled group of connoisseurs to café Stalles for a beer and whiskey tasting experience. (Full disclosure, we are definitely not skilled, and it was basically just an excuse to gather together, but let’s pretend.)

Following months of diligent planning, the day had finally arrived. When we got there, after waiting a bit for a couple of late appearances, we were led to our table by the welcoming staff. We sat outside on the terrace, next to the busy Nieuwe Binnenweg which was sometimes bothersome but not a deal-breaker. The noise of conversations and sounds of live music from the other bar next door created a vibrant atmosphere around us that set the mood for the evening.

Once we settled down, we faced a more serious challenge - choosing a drink. To say at least, the variety of whiskies and beers is absolutely overwhelming (as you can see from the size of the menu, which in a worst-case scenario can definitely be used as an “umbrella” to cover from the rain). More than 190 types of whiskey and 100 different speciality beers from all around the world - a taste map for everyone. We ordered our first drinks of the night; starting off with a quartet of carefully crafted Kasteel Rouges, a classic Duvel, Mort Subite Kriek and high-quality Japanese whiskey. Stalles also has quite a decent variety of food and snacks, which we didn’t try, but the pizzas on the table behind us looked mouthwatering.

While waiting for our drinks, we found ourselves talking about the current political landscape and we felt the spectre of Jaden Smith proudly looking down on us and nodding in approval (although he subsequently left us when we moved to lighter topics). Eventually, the drinks were brought to us and so the tasting began.

The first thing that stood out to us was the dark red of the Kasteel Rouges, which added a colourful touch to the evening. Those of us not yet familiar with the beers thought they were surprisingly smooth with a strong aftertaste. The Mort Subite Kriek followed the trend set by the Kasteel Rouges with a lighter shade of red and a sweeter taste. As expected, the Duvel proved to be a safe option, with a soft and easy-going flavour. On the other hand, Japanese whiskey was a much more sophisticated experience. After an enlightening Aaron's lecture about whiskey production and consumption methods, with every little sip, we were pretending to be “whisking” experts differentiating aftertastes and evaluating the goodness.  We finished our first round rather quickly, as it was a hot day and we had been looking forward to it.

For the second round, we were a little bit more original, and we each ordered a different drink. Since we were looking to expand our horizons, someone even tried a Mars Maltage “Cosmo”, a blend of Japanese and Scottish whiskey which I didn’t get to taste but looked alright to me. However, the most interesting drinks were, indubitably, the ROTT. Ontbijt Koffie Stout and the ROTT. Melk Stout. A local brew that turned the concept of beer upside down by adding a flip to the original formula of stout. The first consists of a mix of dark beer and coffee (perfect for caffeine addicts) and the latter combines beer and milk (perfect for breakfast). Both worked and although at first, it was a bit unexpected, we quickly got accustomed to the flavour and proceeded to enjoy the rest of our drinks.

Even though weather conditions were perfect for staying outside, stepping a foot inside the bar was unavoidable. I have to be honest, for a quite a small entrance door and not that big looking terrace we were all surprisingly shocked by the size of the bar. Three floors, if not four, of spacious seating areas, round and squared tables, couches and bar chairs. I don’t know the exact number of people that bar can fit, but if I had to estimate, I would say all the econometrics students, even those who switched to IBEB, could easily throw a party there. Interior design gives somewhat Americanized bar vibes, full of vintage posters, empty bottles and eyecatching Bacardi chandeliers.

And since we are inside, we must introduce you to one more super important bar evaluation factor - the bathroom. Toilets are located somewhere upstairs, definitely takes way too much effort and time to get to them, already off to a bad start. But perhaps burning a few calories after consuming rich milky beer is not the worst idea for your summer body. The first thing, and perhaps the only superior thing about this bathroom is the hallway full of mirror walls, which gives a perfect reason to take a bonkers picture or just give yourself a pep talk. Besides that, the interior is just a basic dark and red tones with dimmed light. Boring and doesn’t even match the bar’s vibes. Toilet itself was pretty small. When the smallest person in the group says that it looks more like a kindergarten toilet, then trust me, it is tiny. But I have to say, it was acceptably clean and smelled alright. 6/10.

We finished the pleasant evening by paying reasonable prices and left Stalles a bit happier than we arrived. Overall evaluation: